The mole people surface in Macau

Media hordes descend on the Venice Vegas of the Orient

Is there really any way to endure an intercontinental flight to Macau, other than to get tanked?

Fortunately, I didn't have to answer that question - a friend recently had surgery to repair a torn meniscus, and had painkillers to spare. One oblong white pill stamped M367 washed down with a couple of glasses of wine courtesy of Singapore Air, and I was at cruising altitude.

It was actually relaxing to be on board after the confusion surrounding the ticket dragged on into the day of the flight. Singapore Air always seemed relatively sophisticated as far as airlines go, but the website is a joke. Sure, they tell you to do it all online - its utterly worthless website made it impossible for me to check in online or even register for their frequent flier club. It couldn't even find my name in the database. No matter - Singapore Air is one of the last bastions of stewardess babedom, so it didn't take long to forgive the company its shortcomings.

Funny thing that, the power of women.

It had been ten years since my last trip to the former Portuguese colony, a period in which it has sought to remake itself from a triad and money laundering paradise to a more Vegas-style, corporate experience. There are those who miss the old Vegas, who find the current Disneyland-esque incarnation infuriating, and I was wondering what I would think of the changes being wrought in Macau.

Almost ten years ago, I travelled to Macau during a trip to Hong Kong, to visit the lesser-known of the two European colonies chiselled out of the rocky coast of Southern China. Macau was a major money-laundering hotspot, and a considerable amount of that illegal activity occurred through the casinos. 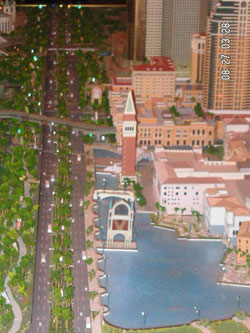 Although the authorities these days blather on about internet gambling, money laundering and terrorist financing, whipping up a media frenzy whenever they can, in truth, the cash model of old-school "brick and mortar" casinos is a much more suitable way of disguising illicit revenue.

A little gambling, and then cocktails on the veranda of that grand old colonial hotel, the Bela Vista, watching the junks sail into the harbor? Why not?

Back then burned-out cars were everywhere. There was a gang war going on at the time, and one guy got taken out down the block from the restaurant we had slipped into to grab a beer and get out of the rain. We heard the gunshots, and after the rain cleared we went to rubberneck the crime scene. He had been shot in his car by an assailant who had pulled up next to him on a motorcycle. It was exactly the kind of hit that prompted the authorities at the time to tell the public it really had nothing to worry about from all the gang killings, since these guys were "professionals" who almost never missed.

The gang war centered largely on control of the VIP rooms at the local casinos, which provided the local triads wth private and convenient hubs for a variety of illegal activities, from loan-sharking to prostitution and drug-dealing. The Stanley Ho-run casinos that then were the only game in town operate a bit differently than a Vegas casino - the public casino floor is quite small, consisting of a few tables. Most of the action takes place upstairs in a warren of rooms that resemble a brothel more than a Vegas casino, and which are sublet by the casino for the sub-letters to run as they see fit.

They are intense, smoky affairs, with small groups of gamblers shouting out numbers in Chinese as the games are played. Some of the high rollers will have a private bookie or assistant making the bets for them. Watching one of those guys sweat out a losing streak is truly something to behold.

That is the Macau the Chinese authorities hope to sweep away.

The Vegas of the Orient and the light of day

Not long after the Portuguese left for good in 1999, the Chinese authorities realized that they needed to eliminate Stanley Ho's stranglehold on the local casinos if they were to get a grip on the triad violence. Much as corporate America pushed the mob out of Vegas, Chinese authorities hope that corporate management will change the face of Macau. 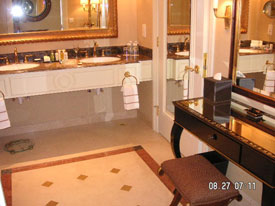 Foremost among those changes is the massive Cotai Strip development, anchored by the Venetian Macau, which is modeled after the Strip in Vegas and has space for up to 22 mega-resorts. The total tossed about for what is already in the works hovers around $10bn, although most of it has yet to be built, lending the number that vague, out-of-focus quality usually associated with government projects. The introductory press video - little more than a gushing tribute to Sheldon Adelson, the owner of the Venetian, it plays on a continuous loop in the media center - labels it the most expensive tourist development in history.

It may or may not be that, but it is certainly a lot of money to be invested in landfill. 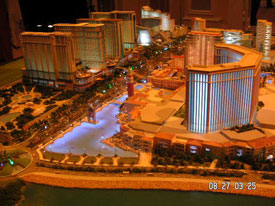 How pretty at night! Quit with the little gondolas.

We touched down at the crack of dawn, and after a ferry to Macau and a car ride to the Venetian, we arrived at about 11am. Frankly, there is not much to do in an empty casino, so I proceeded to enjoy the copious wine and champagne on offer by my gracious host Mr. Adelson, and then cruise the vacant leviathan with a camera. There are no rooms in the Venetian Macau, only suites - 3,000 of them to be exact, each a minimum of 650 sq/ft. In terms of floor space, the Venetian Macau has the equivalent of four Empire State Buildings, and its casino floor is twice the size of anything in Vegas.

The Venetian has the usual assortment of amenities associated with the modern casino, such as toney shops and restaurants - most of which were struggling to open on time. However, it also has a 15,000 seat arena, which later in the year will host the first NBA exhibition in Asia. Clearly, with close to half the world's population less than five hours away by plane, Macau is making an aggressive move to be the entertainment capital of Asia. It already has a Grand Prix, and new construction is everywhere, with the airport being expanded to accommodate what is expected to be a crush of visitors. Macau has already surpassed Vegas in terms of gambling revenues, but it has done it so far mostly with day-trippers - it has fewer than 1/10 the number of rooms that Vegas has. Only about 25 per cent of those that gamble in Macau currently stay the night, but that will change - at least that's the gamble everyone is taking.

The old-school Macau casinos - those run by long-time monopolist Ho - are intense and claustrophobic, catering to hard-core gamblers.

The new casinos have expansive gaming areas and all of the amenities associated with the luxury casino developments of the last ten years - high-end restaurants, shows, and luxury shopping, all designed to provide a complete vacation and to keep vacationers spending as much time and money as possible within those glittering walls. One woman I spoke with who came to take a look at the Venetian actually complained of how big the gaming floor is.

If they can prevent you, mole-like, from seeing the light of day, they will. You are trapped. There is nothing else on the Cotai Strip.

The crush of foreign media was notable mostly for the almost complete absence of the American press. With the exception of a couple of gambling trade publications, only the Wall Street Journal and the American desk of El Reg covered the event, although the press coverage from Asia and Europe was significant. 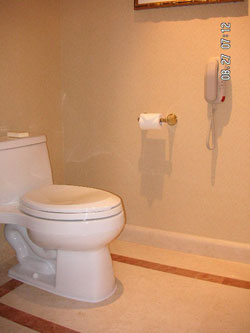 Check out the crapper phone - always a classy touch

Fortunately, the media briefing took place that same day and the wine was still flowing at lunch, which allowed me to continue the party through the reception that night. There was no other way - my flight had left at 1:30 am on Sunday morning and arrived at 6:30 am local time on Monday, meaning I had an entire jet-lagged day to kill. I was drunk enough to offend that PR, thank god. 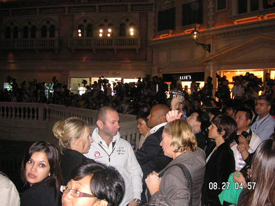 Most of those in attendance were from the travel press, and they typically provide fawning coverage of whatever the latest resort destination might be. The question that will go unasked is the one raised by the one-upmanship behind the construction of every mega-casino, where each has to be more extravagant than the the last - is this finally the one, the white elephant? Just where does it end? "If you build it, they will come" has worked for the casino industry up to now, but why should it forever?

Adelson is banking on tourists beyond Hong Kong for his vision of the Asian Las Vegas - yes, he trademarked that - but Macau doesn't really have much of an airport, forcing it to rely on the airport in Hong Kong, which is a one hour ferry ride away, and a half hour ride from the airport to the ferry. Vegas is accessible from anywhere. 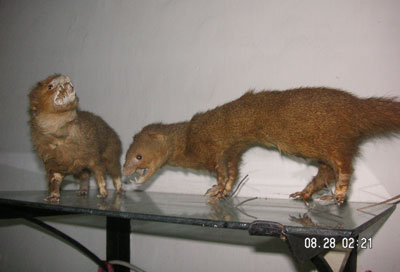 Don't forget to check out the local cultural sights!

Here's to a Titanic-themed casino. Let's really roll the dice.®

Don't mind us, we'll just have a quick look for unsupported installs and then disappear, we pwoooomise
Software3 Feb 2023 | 11