DSEi OK, so you're an elite special forces type. You're just checking that your beeper shows enough that the girls across the bar will notice it, when the damn thing goes off. You race into the barracks.

It seems that there's this crisis somewhere - hostages, WMDs, cat stuck up a tree - doesn't matter. Somebody's arse needs foot contact, and your team has the boots for the job. But there's a problem. The location to be reached lies within hostile airspace, swept by enemy radars. The only way you can get there fast enough is by transport plane: but if your aircraft goes near the target, bad things will happen. 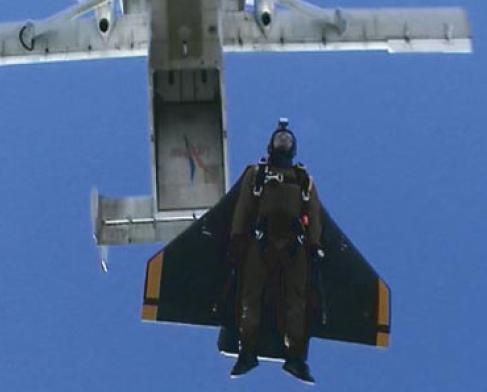 Normally, you'd go with what's called a HAHO parachute jump, High Altitude High Opening. HAHO is a variant on the perhaps better known HALO (High Altitude Low Opening). With HALO, you jump out and freefall most of the way, opening your chute at the last moment. This means you get down fast and minimise your chance of being spotted, but obviously the plane needs to fly close to the landing zone. With HAHO, on the other hand, you get out up in the stratosphere and open your chute immediately. Modern high-performance parachutes have quite good glide performance, and you can travel a long way like this - say 40km in still airs, or even 60 with the wind behind you, jumping from 33,000 feet.

But damn - today, 40km just won't do it. Today the target lies more than 100km within hostile borders, and some utter bastard has sold the local force air-search radars. (Who would do that?) HAHO troopers do show up on radar, and they can often be tracked for most of their descent.

Today's the day for Gryphon. You and your buddies strap on your astounding, stealthy delta-winged backpack airframes, packing most of your kit inside them to minimise radar signature. As the transport plane flies innocently along on the safe side of the border, the team jumps out. Your helmet heads-up displays give you full navigation readouts, and the Gryphon almost flies itself with computer-aided controls, so that you can merrily zoom through clouds or bad weather without trouble. As you start to get near the ground, you fire up the mini jet engines (yes, it can have mini jet engines, apparently) and fly on, covering over 100km with ease. You can even boost up and over a hill or two towards the end, in terrain-following mode. The radar operators on the ground never stand a chance.

As you come in to land, you pop open a conventional chute, and release the Gryphon wing to hang beneath you. It hits the ground, and then you do.

And there you are - 150km inside hostile, well-defended airspace.

It's going to be a bloody long walk back out again, that's for sure.

The Gryphon is actually a reality; though it doesn't yet have its mini jet engines and it isn't in service with any special forces. The amazing strap-on wing is on show at the DSEi killware expo this week, and the Reg defence desk got the chance to chat with Erich Jelitko, Geschaftsfuhrer (MD, roughly) of Spelco (Special Parachute Equipment and Logistics Consortium GbR). Spelco makes HAHO parachute rigs for the German special forces, and Jelitko is a former instructor at the German army's parachute school. He's also one of two men who have flown the Gryphon, with 74 flights/jumps logged; though he seems quite normal.

Without its jets, the Gryphon doesn't carry you a lot further away from the drop aircraft than a HAHO rig. But Jelitko still reckons it's better. He says you get down a lot faster - 15 minutes in the air, as opposed to an hour or more - and its radar return is reduced too. While Spelco hasn't done formal tests, Jelitko says that he's been told the Gryphon is about as detectable "as a bird" on radar.

As for the jets, he says that plan is entirely practical. Spelco will apparently fit small turbojets - of a type apparently used in model aircraft - to the Gryphon next year, and Jelitko says he's looking forward to trying the new rig. He reckons that there should be twenty minutes of fuel, and enough poke to gain altitude slowly if required.

"Our calculations say 178km range," he says. "But of course we have to test this."

The rough Spelco flight plan would call for departing the aeroplane at 33,000-odd feet and gliding down. From 20,000 feet the jets will light up, and the Gryphon troopers can fly high for best range or hug the ground for stealthiness. Once the fuel runs out, it's glide and then pop the chute to land as normal.

As for getting home again from 178km into bandit country, Jelitko says "it's not for the German forces." He says he's been invited to take the Gryphon to America, but so far hasn't done so due to concerns over people copying all his kit and perhaps not paying.

The US forces might be able to suddenly open up an air corridor into defended airspace quickly enough to extract a team of Gryphon troopers before they ran out of supplies or got hunted down or overrun. A stealthy Gryphon insertion followed by a massive air assault might be an option where there was a target which might move away on short notice, or if there were hostages who might be done in at any sign of a rescue mission.

Jelitko also says that people have asked why not have a rocket or something, and simply take off again after the mission, boosting oneself up to gliding height once more.

"But I'm not crazy," he says. Video, pics etc from Spelco here.®

In brief Plus: Activists fight for EU ban on AI lie detectors, and is the age prediction tool used by Meta accurate?
AI + ML4 Jul 2022 | 32