DSEi In our pleasant time at the DSEi kill-kit show we've already seen the airborne route for steely fellows in black outfits to get to work: but there's also the choice of going in underwater. This is probably a lot slower, but does at least seem to offer more chance of getting away afterwards. That could be important, assuming you're there to do something other than drop off a box of chocolates (and nowadays it seems that's out of fashion). Certainly, if you prefer swimfins to parachutes there's a lot of nifty stuff here for you too. 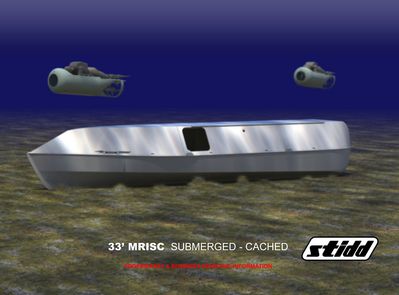 So there you are, 50 miles out at sea, splashing down on your parachutes or departing from your warship. Fifty miles out is a bit far for electric battery-powered submersibles; so why not try the Multi-Role Combatant Craft (MRCC) from Florida-based company STIDD Systems, suppliers to the Navy SEALs, US Marines and "Coalition Partners." The MRCC* can operate as a speedboat on turbodiesels to start with, then drop into stealthy semi-submerged mode as it gets into waters which might be swept by radar. Finally, for the last few miles, it can submerge completely on electric battery drive.

The MRCC, at 32 feet, could be a bit obtrusive on the beach or surfaced in the harbour, but not to worry. Simply park it on the sea bed, open the hatches and deploy the Diver Propulsion Devices (DPDs) for the last couple of miles. These are small two-man torpedo-like devices which can tow a brace of divers and their gear inshore at three knots. Upon arrival the DPDs can be carried up the beach by their passengers and hidden.

This sort of thing would certainly be hard for people to guard against, but the DSEi salesmen are just as happy to sell stuff to the defenders. Supposing you think that pesky underwater attackers might plague your harbour or oil rig or whatever, the nice folks at Coda would love to sell you their 3D scanning sonar, which shows divers clearly - let alone DPD and MRCC mini-subs.

Assuming the aquatic heroes/villains manage to get out of the water, their troubles aren't over. There could be Hollywood-style laser-beam barriers, much favoured to date by agile movie thieves because you can jump, crawl or wriggle through them. (And chosen in at least one case by a director because it allowed the camera to linger lovingly on Catherine Zeta Jones' bottom [NSFW in a church].)

A diver sitting down, seen on Coda 3D Sonar

The chaps who make the Laser-Ace detector must have watched those films, because they've made things a lot harder for the possibly saucy sneak thief. Their laser beam whirls round and round ten times a second, creating a circular plane which cannot be interrupted without triggering an alarm (though you can define safe areas, quadrants etc in the control software). Dr Paul Rivers of MDL, the company behind Laser-Ace, reckons it would also be good for robot vehicles needing to avoid obstacles, for car or aircraft parking, etc.

So our underwater warriors could be in for a fight as they storm the ship, jetty, oil rig or whatever. In a scrap like this you need both body armour in case you get shot, and a lifejacket in case you fall into the water wearing all your heavy kit. No problem; you could always wear a compact self-inflating jacket attached to your armoured tac-vest. You'll no doubt have ditched your diving buoyancy gear, cylinders and such as soon as you left the water.

That's not ideal, though. The usual design has the lifejacket attached outside the armour, so that it has room to inflate. But you'd feel quite the fool if you got hit a few times and fell back into the sea, rejoicing that your body armour had saved you, only to drown because your lifejacket had been holed. 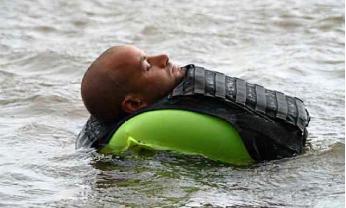 I get knocked down, but I bob back up again

Andrew Kerr reckons he's got the answer. He's Director of Englands, one of - presumably - a very few companies specialising in combined body armour and lifejacket garments. In his Inflatable Body Armour System (IBAS) the lifejacket lies behind the ballistic protection. If you fall in the drink and need to inflate it, velcro fastenings down the sides of the armour rip open and the flotation gear swells up without trouble. Sweet. Strangely, Kerr says that in this case the Special Boat Service (SBS - the maritime SAS) don't use his gear. He's angry about this, saying that a rival system was chosen which could leave Blighty's fighting frogmen struggling with perforated flotation gear.

If you don't like the IBAS - perhaps you find yourself on the deck of an evil billionaire's superyacht clad in faultless evening dress, rather than in a black rubber suit on an oil rig - Kerr has other options. There's slimline, covert armour for wear under the shirt and bow tie, with options for integrated discreet comms and slot-in rigid plates weighing only 5lb each. Kerr claims his light plates will still stop a 7.62mmx54R high-powered bullet from a Dragunov sniper rifle, or five shots from a humble AK47. And should this knock you over the rail and into the wet stuff, fear not: Kerr has a pocket-sized covert flotation unit too, which will keep you afloat until you can get rid of the armour, shoes, cufflinks and the like.

At DSEi, you can't help feeling that the decision to bin the Man In Black chocs advertising campaign was wildly out of step with what's going on. At least what's going on here, anyway.®

*Also known as MRISC, for some reason.