The US Justice Department is busy handing out more RSVPs to NAND flash memory makers, cordially inviting them to a new market-wide price fixing investigation.

On Friday, SanDisk revealed the company and its CEO, Eli Harari, received a grand jury subpoena from federal district court in regard to possible antitrust violations. SanDisk has now been joined by the Japanese electronics firm Toshiba and South Korea's Samsung in the investigation.

The DoJ, for its part, would only say it has launched a probe into the flash memory market and revealed little details. The investigation will likely examine the steep rise in NAND prices that occurred this spring.

SanDisk's US partner Toshiba also said on Friday that it received a subpoena. Samsung, the world's largest maker of memory chips, followed suit today, announcing it has received a similar how-do-you-do from the DoJ.

"Samsung will cooperate fully with the ongoing Department of Justice Antitrust Division investigation," it said in a brief statement. The company added that it is committed to ethical behavior — saying it runs a formal training program that stresses the importance of following acceptable business practices.

Hynix, the world's third largest NAND maker, said today it has not yet been contacted by US authorities about the investigation.

Over the last three years, the Department of Justice has secured price-fixing convictions for DRAM manufacturers such as Samsung, Elpida, Hynix and Infineon. Together, they have coughed up over $730m in fines. In October 2006, US authorities opened an investigation into the SRAM market.

The Canadian Competition Bureau has also opened up an antitrust investigation into flash suppliers. The bureau has asked SanDisk to preserve any records relevant to such an investigation. ® 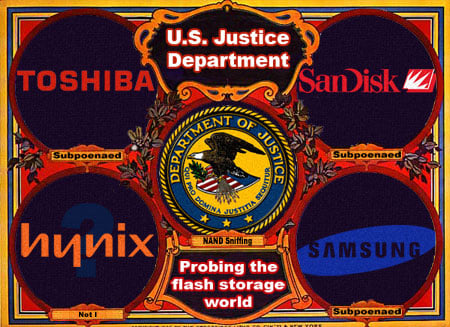 The unhappiest show on earth?

Quanta was the last one standing... and now kneeling