IDF Intel has proclaimed its 32nm process "on track" for the delivery of processors fabbed using the process in late 2009. As proof, it showed off a 300mm wafer comprising 32nm memory cells - the world's first 32nm chips, it claimed.

Each memory chip die contains 1.9bn transistors - enough for 291Mb of storage capacity - but that's largely irrelevant. The chips will not be used in product, just to verify that functioning 32nm transistors can be made by Intel's fabs.

The 32nm process will be used in 'Westmere', the processor generation that follows 'Nehalem', Intel's next major microarchitecture design. Just as the upcoming 'Penryn' is a the 45nm die-shrink of the 65nm Core 2, so Westmere - formerly 'Nehalem C' - is the 32nm die-shrink of the 45nm Nehalem. 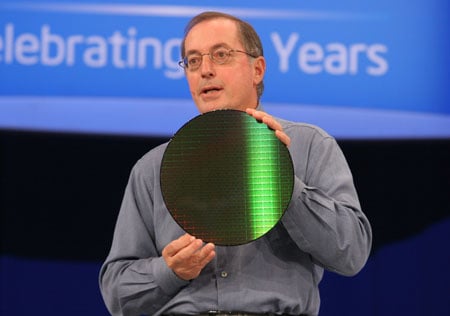 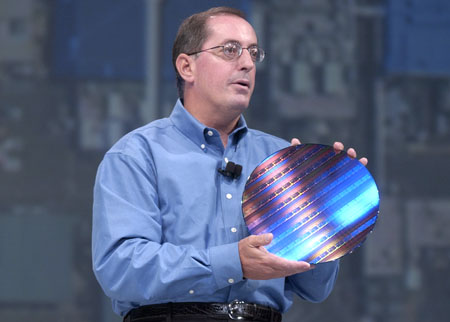 Intel CEO Paul Otellini held up a 300mm wafer full of 32nm chips during his IDF keynote. His colleague, the Digital Enterprise Group's Steve Smith, waved around a 300mm wafer apparently full of 45nm Core 2 Extreme chips. When are these folks going to realise these things appear identical to the rest of us?

Actually, we suspect Intel senior execs are actually having a crafty laugh at the assembled hacks by holding up the same Pentium 4 wafers year after year. How many of their audience could tell the difference?