IDF The brains behind USB are to take the peripheral interconnect technology into the HD era with a new version, 3.0, due to be completed by the middle of 2008.

USB 3.0 is set to deliver a data transfer rate of up to 4.8Gbps - ten times today's 480Mbps USB 2.0 data rate - and introduce optical interconnects to the bus. The goal, the companies behind the specification said, is to create a version of the bus that's able to deliver files of 25GB or more. 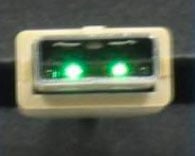 Let there be light: a USB 3 optical connector

Taking USB into the HD era goes beyond the ability to deal with the kind of files that will require such next-gen optical media for storage, but also involves looking beyond copper cabling. Details were scarce, but the USB 3.0 Promoter Group - which includes the three aforementioned firms, along with NXP, NEC, Texas Instruments and others - is looking to lay the ground work for optical connections.

These may not form part of the USB 3.0 specification, but the standard will have the necessary hooks to allow subsequent versions of it to operate over optical links.

However, the group said the new release would not ignore USB 1.1 and USB 2.0, with both older versions of the bus set to be supported by the next one. How it will operate alongside Wireless USB remains to be seen. WUSB products are only just starting to appear, and while some people may be tempted by its cable-free operation, they may want to wait for a faster-but-cabled standard potentially appearing in products late 2008.