Welcome indeed to the billionaire toyshop

There is another option, less expensive than a proper sub but still able to carry people. Rather than a heavy pressure hull one can build a vessel to operate at ambient pressure, functioning in the same way as a diving bell. Passengers in such boats suffer from inert-gas absorption and other physiological problems just as divers do, limiting the options for the submarine, but it can be lighter and easier to build. Dubai-based firm Exomos, fronted by French ex-navy engineer Herve Jaubert, offers a range of these more basic subs, and claims to have delivered 18 craft since setting up. That doesn't mean there are 18 zillionaires cruising about underwater, though: the firm also offers quite basic tourist-excursion designs, some of them not really any more than glass-bottomed boats, along with military-style swimmer delivery jobs and common or garden speedboats. It doesn't seem likely that Exomos has shifted many of its more ambitious designs.

Perhaps the most interesting Exomos vessel is the "Proteus," (pdf) a 60-foot motor cruiser capable of 20-plus knots on the surface but which can submerge and run underwater too. If we were Paul Allen, we'd have something like that in our megayacht boat-bay, rather than the relatively conventional tender which Allen actually keeps parked next to his deep-diving sub.

In fact, we might dispense with the megayacht altogether. Again, it's a bit old fashioned and a bit overly showy, and the basic mothership costs an awful lot given that the toys and accessories are the most interesting bits. There must be some way to maintain a lower profile, it seems to us; and to have more fun with the money.

For instance, why not have a megayacht which actually is a submarine? A company called US Submarines offers a huge 65-metre design, able to cruise the world's oceans on surface diesel propulsion at 15 knots, submerging periodically for a few days at a time running slowly on battery power. It can make dives totalling 30 days before needing fresh supplies of oxygen. 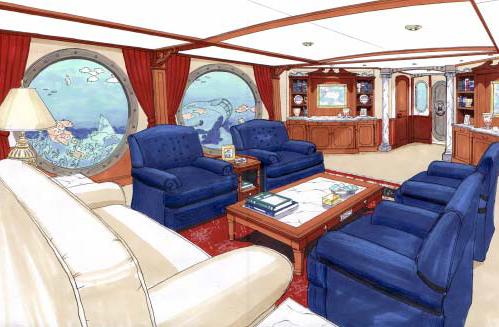 Such a Phoenix-class luxury sub would offer 5000 square feet of space, and unlike existing military vessels includes numerous large, 6-foot-diameter acrylic view ports able to withstand depths up to 300 metres. There is an airlock allowing divers to enter and exit the sub, which can double up as a compression chamber, and a docking collar for a mini-sub, perhaps a special deeper-water job for sightseeing trips below the continental shelf. An adaptation of the Exomos Proteus would be a great tender – you could pop up to the surface in that, leaving your submarine hidden offshore, then run into a harbour at high speed and tie up at the dock without anyone knowing where you'd come from. That said, there would be annoying pressure changes involved in the ascent using a Proteus-style design.

There's room in the Phoenix plans for four en suite double staterooms and eight crew living on their own deck in less luxurious conditions, plus plenty of ritzy bars, lounging areas, grand pianos, gyms or whatever. For the truly adventurous there is the option of so-called "air-independent propulsion" using liquid oxygen tanks to run Stirling-cycle engines while submerged, freeing the Phoenix from the need to surface and recharge its batteries on a frequent basis.

There are a couple of snags facing the prospective undersea yachtsman, though. Firstly, US Submarines doesn't seem to have ever built one of its Phoenix lux-submersibles. Bruce Jones, CEO and founder, told Bloomberg last month that he

"...built his first diesel- and battery-powered sub in 1993. Every sales contract since then has included a confidentiality clause to protect the buyer's identity."

This bravely gives the impression that many a lux-sub has been delivered to secretive clients during the last 14 years, but in fact as of less than two years ago the Seattle Times reported the firm hadn't yet heard from a customer ready to commit.

Olympic Submarine, the firm which built Allen's sub, no longer offers even a web presence. It was an operation of Olympic Tool and Engineering, which has now been bought by Sealaska, an Alaskan Native American concern.

There might be a few reasons for the lack of billionaire interest in serious private subs. The world's navies have operated diesel-electric boats for over 100 years, but as anyone who's tried it knows, they aren't pleasant to travel in; dirty, smelly, extremely cramped and claustrophobic, often damp. It remains to be seen whether this reality can change. As for nice big viewing ports, the mundane reality of the underwater world is usually one of very poor visibility. If you actually could normally see other submarines, interesting fish, underwater canyons etc as in the movies, existing military subs would have windows; but you can't, so they don't.

Even so, the ability to cruise around the world in one's own submarine does seem rather cooler than the megayacht option, and perhaps somewhat cheaper too. Plus, it offers a truly low profile, excellent security and the ability to ignore rough weather at sea. If anyone ever does order a Phoenix, as US Submarines says, it really would be "one of the most significant personal transportation devices of the century".

Analysis For all the billions poured in, is a 'Made in America' sticker worth it?
Systems18 Aug 2022 |

Food and fuels, too? Totally not sounding like a Star Trek replicator
Science18 Aug 2022 | 14