Lenovo has become the latest manufacturer to jump on the green PC bandwagon. It's created a desktop machine that doesn't gobble up as much electricity as others do and which can also be powered by a solar panel. 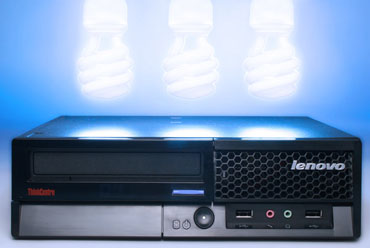 The company claimed the ThinkCentre A61e desktop - aka 'Blue Sky' - is made from materials 90 per cent of which can be reused or recycled. So can 90 per cent of the packaging. The A61e's based on a choice of AMD "energy efficient" Sempron single-core or dual-core Athlon X2 CPUs, all designed to consume no more than 45W of power.

All versions of the PC ship with just 512MB of 667MHz DDR 2 notebook-format memory and an average sized 80-750GB of hard drive space. It also includes an ATI Radeon X1200 graphics engine built into the AMD 690V chipset.

The ThinkCentre A61e will be available next month for around $400 (£200/€240). Lenovo didn't say how much extra the aforementioned solar panel will cost, and when we checked with the A61e's website, the panel was not yet being offered.

In July, Western Digital unveiled a series of 2.5in "green" hard drives, designed to help users reduce the size of their data storage carbon footprints through use of three power saving technologies.