Bad news for aliens in charge of special effects

The southern Martian ice cap is mostly made of water, according to those clever boffins* at MIT. 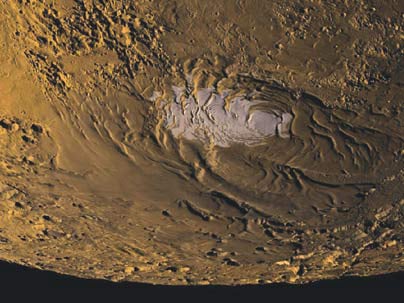 The polar caps on the red planet were thought to be composed largely of a thin layer of frozen CO2, resting over a dust and ice mixture. But new analysis by MIT researchers, led by Maria Zuber, MIT professor of geophysics, suggests that the largest constituent is in fact bog-standard H2O.

Scientists have long wondered whether or not water ice existed in any quantity on Mars. But the polar caps were thought to be more likely to contain CO2 than water, because the atmosphere of Mars is so arid. (On reflection, that sentence rather suggests the presence of frozen water, but who are we to argue stuff like that with 20-20 hindsight?)

Zuber's team noticed that around the CO2 cap there was a smooth, darker region. Unsure what it was made of the team took a closer look. "What we found is that water ice is the dominant constituent beneath a thin dust veneer," Zuber said.

Drawing on topographical and gravitational data collected by three Mars orbiters, the team calculated the volume and mass of the ice cap. From there they worked out its density, and compared it to the density of water ice (about 1000kg per cubic metre), and frozen CO2 (roughly 1600kg per cubic metre). Based on their calculations, they conclude that at 1220kg per cubic metre, the polar cap is mostly water with about 15 per cent silcate dust mixed in.

"It's a really simple experiment, but you have to measure things very precisely," Zuber said.

Next, Zuber plans to run the same experiment for the northern cap. Unlike the south pole, this cap is not thought to be dusty, but it sits right next to a large area of dunes which are now thought to cover a significant amount of ice. ®

*Obviously not the ones who thought going to an airport with wires sticking out of a hoodie, and holding a lump of Play-Doh would be a really good idea.