Terminator 3 Pringles-tube ordnance in the offing

The US Army is looking to develop a range of miniaturised guided missiles for use by its robot warriors of the future, according to reports. Each missile could be the size of a large party cracker.

Under its Future Combat System (FCS) programme, the US Army plans to kit itself out with all kinds of futuristic gear. Originally, this was to include a lot of robots - including a kind of autonomous droid tank and four different kinds of aerial death-mech - but budget worries have led to several of the machine warriors being deferred.

Some are still left, however, including the miniature flying-dalek Class I and the robotised helicopter Class IV (the class-IV, charmingly, is to be capable of Manned and Unmanned teaming, or MUM operations, in which it cooperates with ordinary fleshy pilots. We suggest SCHTUM, Sudden CHange to Targeting of Unsuspecting Meatsacks, for the day of the inevitable machine-army coup d'etat). 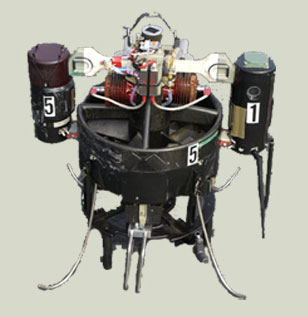 Not so much "Exterminate" as "Obliterate", then.

Thus far, flying kill-droids have tended to be armed with ordinary air weapons, for instance the Hellfire laser-guided missile. This is carried by air force Predators and Reapers, as well as ordinary old Apache attack helicopters. But Hellfires are big old five-foot jobs weighing 100 pounds. They're a bit heavy for little robots to lift. Sometimes, too, a Hellfire might be a bit of a sledgehammer when what you really wanted was a nutcracker.

Now, according to Flight International, the US Army plan to address these concerns. The plan is to develop a new class of mini-missiles, perhaps not dissimilar to the ones used for corridor scuffling by the little flying killbots at the end of Terminator 3.

Suzy Young, US Army advanced science and tech chief, told a killbot convention in France that "we want lethality for a non-traditional enemy", presumably referring to testy southwest Asians rather than the Governator and chums. It appears that each missile will be perhaps 18 inches long and weigh two pounds, even smaller and lighter than the Vietnam-vintage M72 LAW rocket.

(The LAW was always of dubious usefulness against its intended target - enemy tanks - but has long been popular among foot soldiers for taking out bunkers, blowing holes in walls etc. US Marines are still using it in Iraq, reportedly fitted with a new trendy fuel-air warhead.)

The LAW was a simple free-flying job, too, but the new droid-carried micro-missiles will be capable of tracking in on a laser dot at the very least. There are man-portable weapons which do this, or which can track an aircraft's heat exhaust, but they tend to be quite heavy and bulky.

The new US initiative seems to suggest a guided missile not much bigger than a tube of Pringles; one that could perhaps be carried by the new generation of man-portable, hand-launched silent mini-planes now going into action.

Latest-generation thermal imager kit might allow the new micro-missiles - or their launching droid motherships - to track the heat signature of individual humans in true sci-fi style. Flight reckons there will be a "family of interchangeable warheads", no doubt including fashionable fuel-air, armour piercing etc.

In many ways it seems a bit lazy of the US defence establishment to only develop these lightweight super-missiles for the convenience of robots. Many a cursing, overburdened human grunt of recent decades would have been glad to have a trouser-pocket thermobaric bomb rather than a mortar baseplate or similar.

The arms designers would contend, of course, that until very recently they were mainly looking to blow up enemy tanks - and you need a fairly big, fat missile for that. But it could be that in fact the weapons factories are working more and more for the robot army rather than the fleshy one...