Yeah, but what's that in cubic furlongs?

Those among you who recently adopted the new Vulture Central standards of volume, length, area and, critically, the speed of sheep in a vacuum, might be interested to learn that Google Maps has decided to offer a few alternatives of its own.

So, if you were ever wondering just how far it is from Dallas to New York in Babylonian trade cubits, Russian versts or California vara, just hit "My Maps", then "Distance Measurement Tool" followed by "I'm feeling geeky" and select from the drop-down menu.

While we'd never suggest that our own initiative prompted Google to jump on this particular bandwagon (the length of which is 47 linguine (lg), for the record), but one option caught our eye: 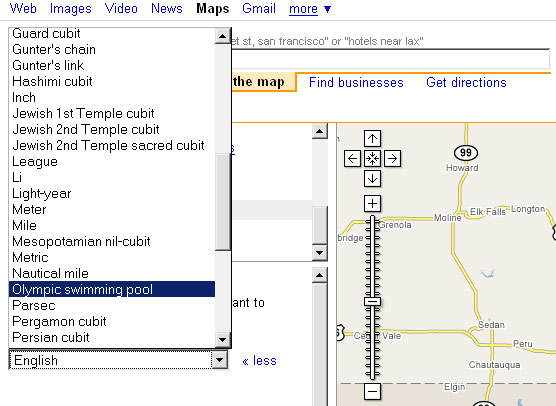 Hmmm. Of course, El Reg correctly uses the Olympic-sized swimming pool (=4,780,114 grapefruit, or gf), as a unit of volume. Furthermore, Google has omitted the universally-accepted double-decker-bus (65.85lg) from its list, which leads us to suspect this isn't actually a serious attempt to enhance its Maps' funtionality.

Mind you, it does have the US standard Smoot, already available on Google Earth. For those of you not au fait with the Smoot, we should explain it was created in 1958 by MIT students who used one Oliver R. Smoot (1.7018m, or 12.16lg) to measure the Harvard Bridge.