Secures IP in the telly-wearing market

Dublin-based firm Adwalker has been granted a US patent for its wearable interactive digital media platform.

"We have always been aggressive on the IP (Intellectual Property) front," Adwalker spokesman Simon Crisp told ENN. "The wearable media market in the US is growing all the time, so there's real value in securing the IP, both from a commercial and protection point of view." 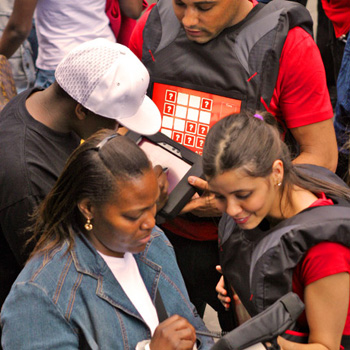 In a statement, Adwalker's chief operating officer Keith Jordan commented: "The grant of this patent in the world's largest, fastest growing and most competitive marketplace for wearable media is significant. The board is actively pursuing ways to use the company's intellectual property in a range of markets across a number of countries."

At the end of August, the company reported a €3.2m loss for the year ending February 2007. The loss was attributed primarily to the firm's policy of aggressive expansion and investment in the US, UK and Ireland that saw turnover for the same year increase 155 per cent, and the signing of contracts with clients such as IBM, Heineken, Castrol, Waitrose and BT. The company also has a co-marketing agreement with music download service eMusic.

At the time of the August announcement, Adwalker also said it was undertaking specific campaigns to sign up consumer trial lists on behalf of two "well known" music and DVD film rental companies in the UK and expected that this campaign would generate "significant" revenues in the last quarter of 2007 and the first quarter of 2008.

In May of this year, Adwalker announced that it was in talks with a major corporation to conduct a pilot of an interactive fixed screen digital network, with a view to rolling out a network of interactive screens across Europe. An unnamed source has since confirmed to ENN that the company in question is Unilever, with the pilot screens currently being deployed next to ice-cream displays in a nationwide convenience store chain.

Adwalker's wearable platform is also gaining some high-profile attention; it was featured in an episode of Donald Trump's TV programme The Apprentice in March of this year.

Headquartered in Dublin, Adwalker is listed on London's Alternative Investment Market (AIM) and has offices there and in New York.