Note to despots: You can't kill the internet

The latest reports from the turmoil in Burma say at least one person died and many were wounded today when police again shot at protesters on the streets of Rangoon.

Until now, one of the most striking things about the monk-led uprising has been the volume of information that has been escaping about the usually secretive regime's activities.

Citizens have been using mobile phones, cyber cafes, and according to some reports, internet connections controlled by foreign embassies to get news to the outside world. 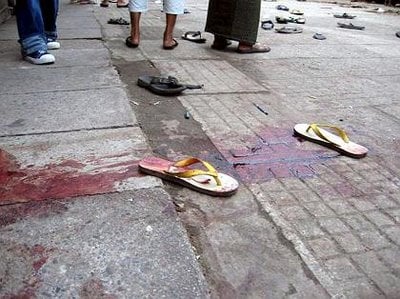 Blood on the streets [via ko-htike.blogspot.com]

The junta now seems to have recognised that worldwide communications networks make the kind of hammer blow it delivered when it murdered 3,000 democracy campaigners in 1989 a difficult PR proposition. According to free speech advocate Reporters Without Borders, they've swooped to cut off channels over the last few days.

Happily, it doesn't seem to be working too well, thanks to the ingenuity of the Burmese people. According to The Asia Times: Thanks to the growing global proliferation of proxy servers, proxy sites, encrypted e-mail accounts, http tunnels and other creative workarounds, the cyber-reality in Myanmar [Burma] is actually much less restricted than ONI's research indicated." A 2005 Study by Havard's OPenNet Initiative (ONI) had said that Burma's internet censorship "was among the tightest in the World."

The pressure group Democratic Voice of Burma has up-to-date accounts of the uprising here, and the BBC is posting first-hand reports here.

and dragging them onto E2000 trucks

and most of them are girls

and people are shouting

The few professional journalists operating in the country are delivering reports via satellite phones that the regime cannot interfere with.

Despite the growing international outcry over current events, an emergency meeting of the UN security council on Wednesday mustered only a "statement of concern". Burma's near neighbour and trade partner China has by all accounts led moves to block sanctions. The European Parliament called on China and Russia to drop their opposition to sanctions today.

China is, of course, expert in supressing online dissent itself. It'll play host to the world at the Olympics in Beijing next summer, and cannot afford a bloodbath on its doorstep as it tries to sell "new China".

According to The Reg's technical team, we've had 216 readers visit us from Burma since 1 September. Good luck to you if you're still reading. ®