How to expose Gmail contacts without really trying

Google security lieutenants can't get a break. Over the past week, they've taken a public pounding, following reports of at least four previously undisclosed holes that included new cracks in Gmail and weaknesses that jeopardize the privacy of those who rely on the site to organize photos or administer their websites. 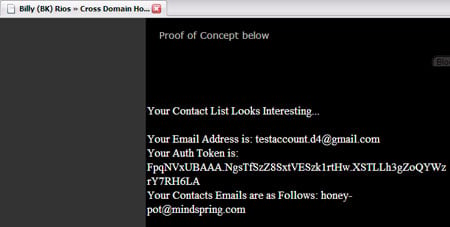 Now comes a post from the Billy (BK) Rios Blog that demonstrates yet another way to siphon contacts; the code could be easily modified to steal email and other data users may entrust to the Google.com domain.

Google bug squashers fixed the bug, but not before we witnessed it first hand. We set up our own Google account for purposes of testing the proof-of-concept code and within 10 seconds it exposed our sole Gmail contact. (A screen shot is provided to the right.) Note: for the exploit to work, the user had to be logged in to Google.

The proof-of concept code draws on a weakness in the way Google Docs handles cross-domain requests. An attacker can create a standard Flash object on a malicious server that links to a Google Docs file titled Crossdomain.xml and gain full access to the victim's Google contents, according to the post.

"The PoC just displays your contact list, but I have full access to the Google.com domain, so the sky is the limit (aka I can read all your email too)," the author wrote. "It seems that Google has taken some measures to sanitize for XSS ... but it seems that their focus on XSS may have caused them t miss a different type of cross domain exposure."

XSS is shorthand for cross site scripts, a means of injecting unauthorized code by making it appear as if it's hosted by a trusted website. At least three of the four previous Google vulnerabilities were based on XSS weaknesses, but this one is not. Instead it exploits a related bu new method for making cross domain requests.

"Google takes the security of our users' information very seriously," a Google spokeswoman said. "We worked quickly to address the recently reported vulnerability, and we have rolled out a fix."

The speed with which the flaw was fixed is testament to efficacy of Google's security team. It also speaks to one of the silver linings of web-based vulnerabilities, which frequently can be patched by applying new code on a single server. By comparison, software makes such as Microsoft and Apple must push out updates to millions of individual machines. ®