Japanese boffins have used artificial insemination to breed mutant frogs with transparent skin. The scientists reckon this will make biological research - not to mention school biology lessons - signifcantly less messy and traumatic, as it will no longer be necessary to cut the slime-filled creatures up in order to examine their innards.

"You can watch organs of the same frog over its entire life as you don't have to dissect it," enthused noted Hiroshima University* sunroof-amphibian man Professor Masayuki Sumida, according to AFP. 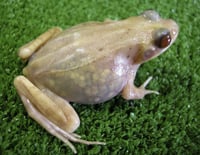 Sumida and his team of batrachian-bothering boffins produced the new see-through-packaged critters by breeding carefully selected mutant albino frogs. The pale-skinned pond dwellers' offspring came out opaque owing to the presence of dominant regular-type genes, but by breeding these genetic carrier frogs together the crafty researchers obtained breakthrough batrachians with built-in windows.

It seems the new special frogs - derived from regulation rena japonica japanese browns - are transparent even as tadpoles. This provides hours of fun for committed frog fanciers as "you can see dramatic changes of organs when tadpoles mutate into frogs", according to Sumida. He believes the secret of the see-through creatures will be so commercially valuable that he plans to patent them.

It might seem impossible to prevent unscrupulous breeders producing illegally pirated sunroof-frog copies to be sold in supermarket carparks, but in fact Sumida's biotech has built-in BRM (Batrachian Rights Management). The glassy frogs can have children, also transparent, but the following generation die at birth. If you want to look at a frog's guts without slicing it up, you'll have to pay licensing.

Sumida's plans don't stop there. He reckons a move forward from simple eugenics to actual genetic modification could produce new and still more innovative frog technology. The good professor envisaged an exciting new type of transparent amphibian which would glow luminously when it developed cancer, for instance.

Obviously, glowing see-through cancerous batrachians are great; but indeed this news is no surprise when one considers the other amazing capabilities of the moist miniature marsh-dwellers (for instance the ability to sweat hallucinogenic drugs, antiseptic ointment, insect repellent, or even glue).

Surely it can't be long until some clever scientist employs Sumida's patented batrachian boffinry to develop a pocket-sized variety which can dispense a refreshing mindbending chemical, be used to stick notes to the fridge, deal with insect bites, and light up a dark hallway. One would be able to tell how much loopy juice, glue etc was left in the little fellow's reservoirs simply by looking, of course. And in extremis the adaptable amphibian could be sold to a passing Frenchman as a tasty snack.

Frogs. Is there anything they can't do? ®

*There's no connection between local availability of mutant frogs and the 1945 bucket of sunshine from the States, apparently.