All camera and no connectivity?

Review The latest handset to join Samsung's stylish sliderphone line-up is unashamedly image conscious. However, the G600 is all about its photographic features rather than its flash looks, being one of a few mobiles to boast a five-megapixel camera.

Samsung has decided to roll out its first European 5Mp mobile without 3G - it's a quad-band GSM/GPRS/Edge phone, so there’s no video calling or high-speed surfing and downloads to waste the day with. As well as the headline-grabbing camera, there's a digital music player and FM radio to keep you entertained, and Samsung is throwing in a 1GB Micro SD memory card - to go with 55MB of built-in storage - along with a set of stereo headphones and a Samsung WEP 310 Bluetooth headset. 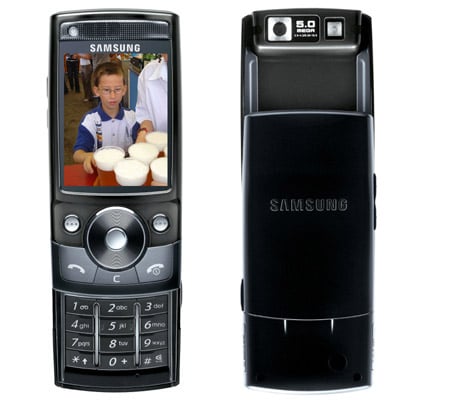 The G600 clearly looks like it's a member of the Samsung phone family, albeit in an understated, elegant kind of way. It has a similar feature set to the swanky Ultra II Series U600, but does away with the touch-sensitive controls that look great but can make handling awkward.

Not that the G600's design would immediately give you a clue to the camera power within. It's a fraction under 15mm thick, so no bulging camera biceps to give the game away. There's no Cyber-shot phone-cum-camera style tip-offs either. When shut, the G600 looks like a regular sliderphone with a reassuringly solid feel about it. The camera is only revealed when the slider is slipped open, with the 5Mp autofocus lens and LED flash rising from the rear casing.

Hiding it away is no doubt good for keeping the G600's lens free from wear and tear. It does mean though you have to slip open the phone any time you want to take a snap. A camera button on the side activates the shooter rapidly, and controls appear on the screen in landscape mode. With the keypad open, though, it's not quite as easy-snapping as some turn-and-shoot digital camera-style phones. Still, the G600 does have a stunning display as a viewfinder, with 2.2in of 320 x 240 resolution presenting up to 16m colours.

Anyone with a grasp of sliderphone basics will easily get to grips with the G600's controls. As well as the usual pattern of softkeys, call, end and cancel buttons, there's a large iPod-like disc at the front. Unlike Samsung's X830 music phone, this sadly doesn't spin you through the menus with iPod-like elan. It's simply a standard five-way navigation joypad, as found on plenty of other Samsungs. It can be used for shortcuts to key features, and users can reconfigure the default settings easily from within the phone's Settings sub-menu.

Slide down the... er... slider, and you find a keypad reassuringly professional feel. No cluttered, over-complicated layout here – the keys are large, easy to read and well-spaced, with two silver strips separating the columns with functional elegance. Even large fingered users will be pleased tapping out messages or numbers with the responsive keys.

Menu navigation is a pretty standard Samsung affair, though presented in an attractive interface with large, clear icons and labeling as you click through the settings. There are plenty of configuration options including several menu themes to choose from, and you can set your own shortcuts to favourite features for a My Menu option, accessed in one-click from the joypad.

Initially, when you switch on, you get a dynamic screen display that shows a regional landmark - Big Ben in London in our case - which gets cloudy if the signal is weak and switches to a nighttime shot in the evening. Of course, you can switch this to a selection of supplied wallpapers, download your own or use your own snaps.