Official: James Blunt is a w*nker

Now, that is blunt

The Great British public have spoken. After allowing warbling military aristocrat James Blunt to inflict his peculiar brand of vanilla-acoustic mewl on a broken nation for two years, they have risen up to declare he's a w*nker.

The verdict has been delivered via CD warehousing operation Amazon.co.uk, as witnessed in the image below. The related searches for the string "james blunt", as well as returning inoffensive Scottish chanteuse KT Tunstall, include the word "w*nker". 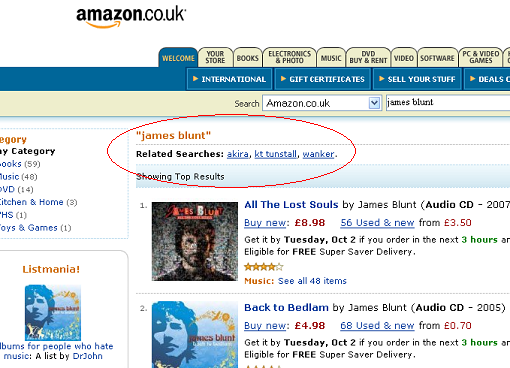 Furthermore, we'd also like to insist that Captain Jimmy Blunt permanently deploys himself in the US, where related searches on Amazon.com are markedly less damning.

Try it yourself here. ®

Thanks to Ian for the beautiful tip-off.