NASA catches it on camera

STEREO, NASA's satellite sent up to the heavens to examine the surface of the Sun, has captured the first ever images of a collision between a comet and a solar "hurricane". The force of the solar storm, a coronal mass ejection (CME), was so great that it tore the plasma tail from the comet. 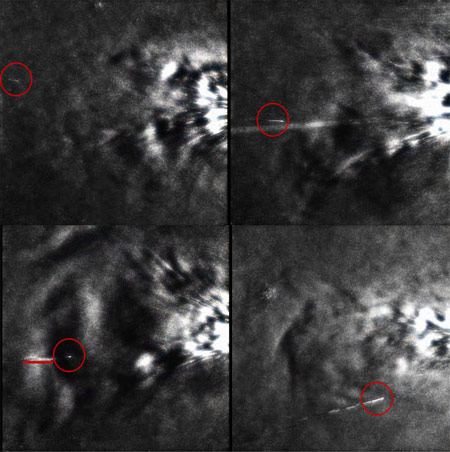 The tail comes off a comet. Credit: NASA's STEREO satellite

In the sequence of four images, you can clearly see the tail of Encke's Comet brighten as the cloud of highly-charged solar material sweeps past. The comet's plasma tail is then detached and carried away by the ejected solar mass.

The team of scientists working on the STEREO mission have combined the images to make a movie. They've also written up the discovery for the 10 October issue of the journal Astrophysical Journal Letters.

Lead author and researcher at the Naval Research Laboratory Angelos Vourlidas, professed himself "awestruck" by the images.

"This is the first time we've witnessed a collision between a coronal mass ejection and a comet and the surprise of seeing the disconnection of the tail was the icing on the cake," he said.

It has been known for a while that plasma tails can be disconnected from their comets, but the mechanism by which it happened was somewhat mysterious. CMEs were on the list of suspects, but there was not enough evidence for a warrant.

A coronal mass ejection is a vast quantity (billions of tonnes) of solar matter hurled from the surface of the sun at speeds of more than 2,000 miles per second. When they reach Earth, they trigger geomagnetic storms of such magnitude that satellites, power stations, and radio communications are all vulnerable to disruption.

The scientists propose that the ionised gas of the CME interacted with the comet in a way similar to a magnetic reconnection event. In such an event, oppositely directed magnetic fields around the comet collide with the fields in the CME. The comet's fields are compressed, and suddenly link together, releasing a burst of energy that separates the tail. ®