The US Special Operations Command (SOCOM) has decided to buy a hydrogen-fuelled robot plane which can cruise at 60,000 feet or more for five days at a time.

The cost-plus deal allocates $57m for an initial "Global Observer" drone, with options for an additional two aircraft which could take the total value to $108m.

SOCOM commands most of the USA's well-known-yet-frightfully-secret elite forces, including Navy SEALs, Army Green Berets, Rangers etc. It also controls a substantial fleet of aircraft, including Spectre gunships, various helicopters, and soon the long-awaited CV-22 "Osprey" tiltrotor, also going into service with the US Marines. 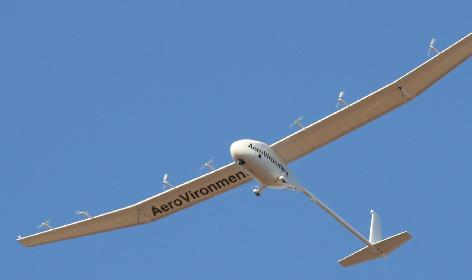 Forget satellites, this is what you want.

Now, however, SOCOM is moving into the High Altitude Long Endurance (HALE) aircraft world with the Global Observer. According to Aerovironment, the maker, a Global Observer will be able to make "five to seven day" flights at "55,000 to 65,000 feet... A system consisting of two or three aircraft will provide continuous [spying] or communications relay over an area of interest."

It has sometimes been assumed in the military/tech press that Global Observer's prime mover is hydrogen fuel cells, but in fact Aerovironment and SOCOM are careful to avoid saying this, merely describing the vehicle as "hydrogen powered". One does note that this federal government notice dated from January says:

AeroVironment designed and built a hydrogen-fueled internal combustion engine and power-plant and successfully demonstrated it in an altitude chamber for a non-stop mission profile of five days at simulated operational environment above 65,000 feet. Hydrogen power is a critical technology to achieve the long duration requirements of the UAS. AeroVironment is currently executing a risk reduction program to develop and demonstrate a full-scale, flight prototype power-plant, propulsive motor, and liquid hydrogen fuel tank under a contract with USSOCOM.

This suggests the Global Observer may get some or all of its power by burning hydrogen in a fairly ordinary internal-combustion engine. It's possible to speculate that this engine will drive a generator feeding electric-drive propellors, rather than using a gearbox.

The aircraft pictures, the very limited capabilities of current fuel-cell aircraft, and the fact that the Observer will need lots of electricity to power its spyeye or comms payload all tend to bear this out.

So does the fact that the Orion drone, also hydrogen-fuelled for high-altitude loitering, is said to be driven by nothing more technically advanced than a supercharged Ford car engine, albeit in this case one coupled directly to the propellor.

Car engines will fairly happily burn hydrogen, but on the ground there are severe problems with the cryogenic liquid fuel boiling off from even very well insulated tanks - it's typically all gone within days. That's probably not so much of an issue up in the freezing heights where the Global Observer will fly, however.