In a release today, the company invites the world to admire MAARS™ (Modular Advanced Armed Robotic System). MAARS is made by Qinetiq's recent American acquisition, Foster-Miller, who are perhaps most famous for their TALON line of military/police/first-responder robots. 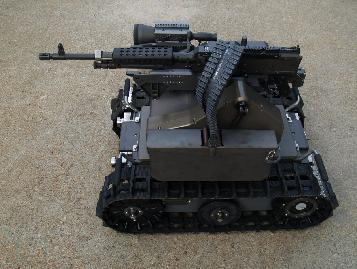 MAARS™. Always try to be the guy with the control console.

TALONs are small tracked ground-crawling droids which can be fitted with a variety of different field-handy deelies: articulated gripper claws, specialised bomb-disposal weapons, Taser electric cattleprod guns, etc. TALON SWAT can be configured with "a choice of weapons for a lethal or less-than-lethal response", while the SWORDS* TALON can have an M16 assault rifle, M240 or M249 machinegun, Barrett .50 sniper rifle - good for shooting people hiding behind truck engine blocks - or really get serious with a multi-shot grenade or rocket-launcher.

Given this fearsome arsenal of robotic weaponry, one does wonder what on earth the new MAARS™ droid might bring to the party. Qinetiq says that it "uses the more powerful M240B Medium Machine Gun" - puzzling, as the existing bot could already do that - "and has significant improvements... compared to its SWORDS predecessor... The new Digital Control Unit significantly improves... safety margins..."

Still, it's "Transformer-like". Perhaps it can disguise itself as, oh, a Segway or an electric wheelchair scooter or something - only revealing its true slaughter-machine nature at the last moment. That would make sense, kind of - the thing's chassis is broadly the same as that of a modern mobility scooter.

Well, no. Actually, according to Qinetiq:

"MAARS will also come with a new manipulator arm [just like the old TALON]... The arm can quickly replace the turret mounted M240B weapon, literally ‘transforming’ it from a remote weapons platform for force protection to a [bomb-disposal] tool."