Nintendo limbers up for Wii Fit

The first weight-loss will be from your wallet

Nintendo is on a mission to get Wii owners working up even more of sweat. The company's announced plans to launch its anticipated Wii Fit home fitness game in Japan later this year. 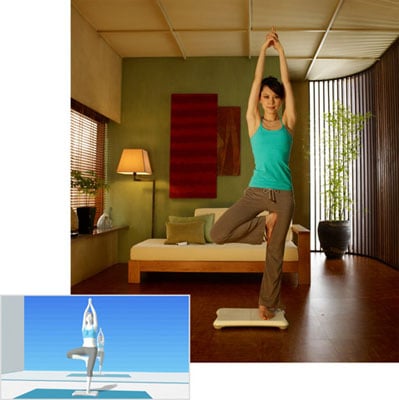 Nintendo's Wii Fit and Balance Board: better than the gym?

The game, which is based around Nintendo's Balance Board peripheral, initially goes on sale in Japan on 1 December for ¥8800 (£36/€53/$75), although the company hasn't yet mentioned when the game will be rolled out to the Western World's somewhat flabbier nations.

The Balance Board looks slightly larger than a set of bathroom scales and contains pressure sensors that detect when the user leans, moves or jumps in time with the action on screen.

Despite not giving away full details of the various sports available, Nintendo has said users will be able to head virtual footballs or take part in ski-jumping. There's also expected to be some more traditional fitness pursuits too, including yoga and aerobics.

Earlier this year, American Mickey DeLorenzo, 25, claimed a 30-minute-a-day Wii Sports regime lost him 4kg and reduced his Body Mass Index (BMI) from 25.2 to 24.0 over a six-week period.