A private view of Phoenix and Mars

It's further from Tucson than you'd think

But Smith has other interests, equally important. "We have a lot of other science goals that have nothing to do with life. The hydrological cycle, the weather cycle, the properties of the ice – all these things tell us about the history and how the planet works as a planet. Those really are true science goals. The thing about life is a hope." 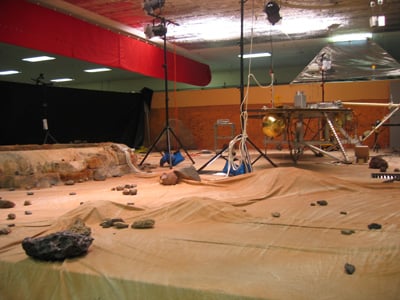 Look at those cavemen go

The idea of life on Mars is the stuff science fiction is made of, and like many scientists Smith says he loved sci-fi as a child. "I liked flying around in rocket ships," he says, recalling a favourite book called Rocket Jockey. "Zipping around between the planets and having great adventures with Titanians and Centurnions. I was 12 years old, I loved it." It didn't occur to him to become an astronaut, however: the moon landing happened while he was in college. "I thought, well, I missed that chance." There were opportunities when the space shuttle started, but by then, "I was not in that frame of mind."

The influence remained. "That youthful fascination with the unknown – it certainly drove me towards science." He mentions Tom Swift "and his incredible earth-digging machine – he invents devices in his back yard and for example digs down to the centre of the earth with it. He could do anything, and I thought well, if I had a laboratory in my back yard I could do anything too."

If you were going to have such a thing, Tucson would probably be the place. Aside from its long connections with the space programme – the walls of this building, owned by the University of Arizona, are lined with posters and pictures commemorating the university's involvement with a long line of previous NASA missions – astronomy seems to be the local industry. Tucson is the ideal destination for the astronomy tourist.

Although the Mars lander work is not open to the public, most of the other astronomy-related resources are. Also at the University of Arizona, the Flandrau Planetarium has daily shows and a publicly accessible telescope. If you have a car – almost inescapable in Tucson – you can combine a drive in Arizona's glorious desert with a visit to any one of a number of observatories. 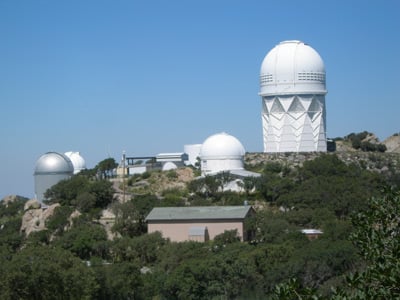 "The city is surrounded by mountains," says astronomy writer Ian Ridpath, "and it seems that almost every peak has a telescope on it." Tucson even has local ordinances designed to minimise light spill so the astronomers will have the best possible viewing conditions, and the Tucson air is exceptionally clear and dry.

The premium visit is to Kitt Peak, about an hour and a half by car from downtown Tucson. The last 12 miles of that drive are a steep climb: the observatory is 6,900 feet up. Astronomers from all over the world apply to use its facilities. Despite a two-month monsoon season in July and August, the observatory averages over 250 nights a year of good viewing. Which explains why, as you walk past the signs warning of venormous snakes, you also pass dormitories with signs asking you to keep the noise down because of "day sleepers".

It's a good trip even if you aren't entranced by the many scopes up there, which include a solar telescope, a radio telescope and, the biggest in the collection, a four-metre job. The 2.1 metre scope at Kitt Peak is nearly the same size as Hubble, and was one of the first robot-controlled scopes. In fact, it was practice for Hubble.

Hooked to the silver screen

But that's just Earth-based tourism. Of the Phoenix mission, NASA says it expects the ice layer on Mars to begin just inches below the soil. Once Phoenix has unfurled its 18 foot wide solar panels and powered up, it will start to dig down using its robotic arm. The arms is tipped with a camera and a conductivity probe to examine the surface before samples are collected and lifted to the lander's two analysis instruments. At least one sample will be heated to check for volatiles such as water and organic molecules. The second instrument will examine the chemistry of the soil.

The tradition of astronomy is now deeply embedded in Arizona, (the stargazing conditions are so good that even the Vatican has a telescope here, from which it runs research in partnership with the University of Arizona) so it makes a nice kind of sense that a mission to find water in the greatest, coldest desert in our solar system will be run from one of the most beautiful deserts on Earth.®

Microsoft, Amazon and Google all have products showing the damage you do and now so does Softbank offshoot
PaaS + IaaS4 Jul 2022 |

In brief Plus: Activists fight for EU ban on AI lie detectors, and is the age prediction tool used by Meta accurate?
AI + ML4 Jul 2022 | 2

What are the 'main benefits' of Outlook? Whatever they are, that's all you'll get
Applications4 Jul 2022 | 22