We're very much obliged today to Hampshire's finest for demonstrating that when knocking up ads for the backs of buses you really need to consider just exactly where the exhaust will sit: 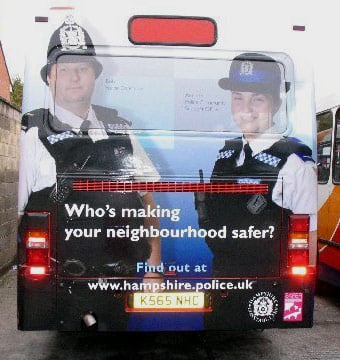 Ahem. Mercifully, the vehicle in question boasts a rather modest pipe, although we're sure it isn't a true reflection of the average Hampshire copper's standard-issue truncheon. Nonetheless, we have made our dossier available to the usual authorities - Middle England for Public Decency and the Daily Mail. ®