Bidding on a Virgin Mary pebble simulacrum picked up on a New Zealand beach had this morning reached a rather silly NZ$26,700 on Trade Me after the owner declared she wouldn't take less that NZ50k for the mineralogical marvel. 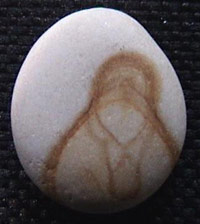 The 1cm stone was discovered last year by Christchurch woman Lisa-Marie Corlet on Kaikoura's South Beach. According to stuff.co.nz, she didn't realise the significance of the find until she got home, and friends quickly advised her to cash in on the rock.

Corlet, however, decided to hang onto the Holy Mother as a "good-luck charm". She confirmed: "I got it and I started having an awesome run of luck."

That didn't last, however, and she eventually decided to auction off the artifact, mindful of previous Virgin Mary simulacra money-spinners. She said: "I won't take less than $50,000 for it. If someone is willing to pay $28,000 for a piece of toast, I'm sure someone out there would pay at least that for rock."

Corlet's first auction was aborted after the winning bid turned out to be false. The relisting is evidently rousing the faithful to online economic excess, so it looks like the vendor's luck is about to change for the better once again.

It's a case of caveat emptor, though, according to NZ's Catholic church. Spokeswoman Lindsay Freer said: "The church's approach [to purported Virgin Mary simulacra] is always very cautious because no one has ever seen Mary, so how would they know what she looks like?" ®