Microsoft-Facebook: Welcome to the Hotel California

Comment Silicon Valley's onanistic elements have been in vinegar-stroke mode for an age over the tussle between Google and Microsoft to invest in $15bn profit-lite social networking phenomenon Facebook.

Facebook claims about 50 million users. By our reckoning, that rates them at $300 a piece.

The webtastic jerkers wake up today on the metaphorical couch with MacBook in lap, trousers round ankles, Kleenex to hand, and hopefully a faint sense of shame. Microsoft made its $240m splurge yesterday. 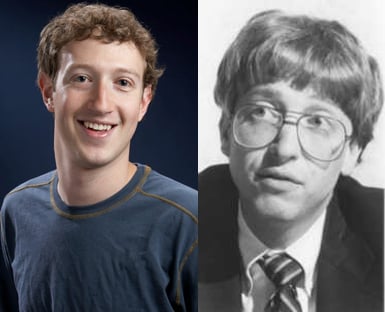 Their mums love them

The hyperbole surrounding the favourite uncle dance-off between Steve Ballmer and the Google lads to slip Mark Zuckerberg a few quid so he can buy some more servers has been surreal to watch. Two combs fighting over a bald man, if you will.

Despite the fact the deal is financially insignificant to Redmond, and will likely have no impact on Facebook's strategy, in a broader sense it could mark a watershed for the web 2.0 hypesters. Microsoft's status in mainstream public consciousness means that more people will understand what social networking is about.

Perhaps they'll realise that web 2.0 is not there to "connect you with the people around you" and not about some pseudo-academic "social graph". That's the bait. The switch is the big data centre pumping adverts based on your age, where you live, who you're friends with, what you like doing for fun, your politics and your grandmother's shoe size.

It seems obvious, and deep down virtually everyone knows it, even the national newspaper lifestyle writers who have been doing Facebook's PR for the last year - take a bow, the Telegraph and the Times.

Still, it was a nice conceit for a while there.

But there's nobody like Ballmer and Gates in their great capitalist zeppelin to piss on those hippie chips, even if their 1.6 per cent gets them little more than an invite to the Christmas party.

Of course, there are the inevitable Facebook protest groups (see here, membership required) - trouble's been brewing down at the personal data mill ever since this minor investment was first rumoured. There's now at least half a dozen Facebook groups with hundreds dedicated to moaning about any Microsoft involvement in the site.

Try this, from the Facebook group "Anti-Microsoft Facebook": "Even though Facebook traffic now supposedly accounts for one per cent of all Internet traffic now, it still seems somehow cool and independent and underground and 'subversive' and allows freedom of expression, etc."

Yeah, man. Targeted marketing will free us all! How could a rich, Harvard-educated white American male do this to us? Oh, wait...

Or this, from "If Microsoft buy a stake in facebook, I will de-register": "The homogenisation of culture brought about by the world being owned by fewer and fewer plutocratic entities is both dangerous and sickening."

Blimey. We're going to send Zuckerberg a little icon of a Molotov cocktail on Facebook. That'll learn the plutocratic scab.