ICANN 2007 Los Angeles The ICANN Los Angeles 2007 meeting begins Monday, and it is Vint Cerf's swan song as chairman of the ICANN board of directors. We couldn't pass up the opportunity to talk to the "father of the internet" about the future of the internet and of ICANN itself. 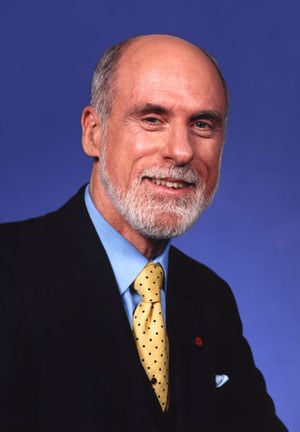 ICANN has come quite a ways since its inception. How do you see it changing in the next few years? This is your last ICANN meeting, and as one of the fathers of the internet, you've seen a lot of changes. How can ICANN continue its outreach beyond North America without becoming completely unwieldy, a kind of United Nations of the internet?

The internet is clearly continuing to grow. The user population is on the order of 1.2 billion. Increasing access with broadband and with mobile devices will drive a range of new applications and users.

Your question regarding outreach beyond North America mistakenly assumes that we have not already organized a major international initiative. We have outreach teams in Europe, the Middle East, Latin America and the Caribbean and in Asia and the Pacific Rim. One hundred countries participate in the Governmental Advisory Committee. The board is extraordinarily diverse and comes from a global community.

Further regionalizing of some of our activities will be helpful. We now have the At Large users of the internet engaged with the Regional At Large Organizations. I think we are already an effective international organization and while housing a complex set of constituencies, I believe we are far from unwieldy.

With the Internationalized Domain Names (IDNs) now functional, will that be enough for ICANN to maintain its role as steward of the internet? ICANN has always claimed that sustaining the integrity of the root zone is one of its core missions, but in some ways, the root has already been split, correct? I believe that the Chinese, for example, continue to maintain separate root servers, and there are ongoing attempts - i.e., UnifiedRoot - to make the process of creating Top Level Domains (TLDs) cheaper, more accessible and therefore more democratic. Is this a genie that ICANN can keep in the bottle forever? Obviously, there are powerful political and economic forces at work here.

The root has not been split. There are some "alternate root" advocates, but so far they are small in number and in effect. China does not have servers distinct from the ICANN root server system. All Chinese domain names resolve within the .cn top level country code. There are some features of the Chinese resolvers that automatically append ".cn" to certain non-fully-qualified domain names and this practice does have the potential to create discontinuity if references are made to these special domain names outside of China.

They are not likely to resolve anywhere else. The idea that an alternative root system will improve the internet ignores the potential hazards of duplicate top level domains that point to distinct sub-classes of domain names – harming the uniform ability to resolve all domain names to unambiguous internet addresses.

The forces that are acting to fracture the internet's system of domain names are not friendly to the objectives of ICANN to maintain end-to-end connectivity and domain name resolvability throughout the internet.