Nintendo to fire Wii Zapper into Europe for Xmas

Nintendo’s Wii Zapper will be available across Europe in time for Christmas, the company said today.

Link’s Crossbow Training requires players to aim the Wii Zapper – which houses both the Remote and Nunchuck - at on-screen targets. The Nunchuck controls gamers’ movements and the Remote’s B button, which connects to a trigger, is used for, well, shooting. Different rates of fire are possible too. 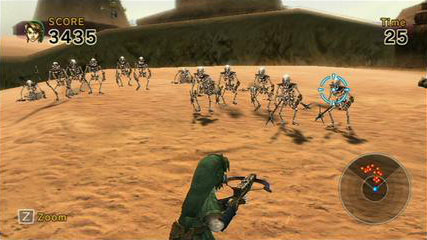 The Zapper also relays re-positioning movements, presumably so you can pretend you’re lurking around a precarious corner, while the Nunchuck’s Z button acts as a zoom.

Various player modes are available, including a multi-player setting letting gamers pass the Zapper around, each shooting for the highest score within a time limit. The perfect wholesome family Christmas entertainment?