SaveTheInterneters to save the internet from Comcast

Members of the SaveTheInternet.com Coalition hope to save the internet from Comcast. 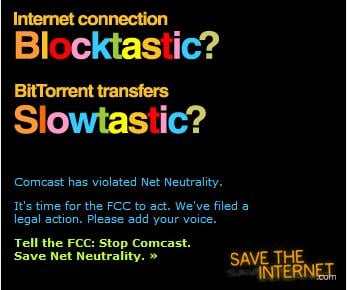 An ad for something other than Comcast

Earlier this month, nationwide tests by The Associated Press proved that Comcast was actively interfering with attempts to swap files over P2P networks like BitTorrent, eDonkey, and Gnutella. And similar accusations date all the way back to last spring.

Comcast claims that it's merely "managing" traffic in an effort to provide users with really awesome internet service. But this doesn't sit too well with several members of SaveTheInternet, including Free Press, Public Knowledge, and the Media Access Project. These net rescuers have long urged the US government to adopt laws that would prevent ISPs from discriminating against certain kinds of net traffic.

"Comcast’s defense is bogus," said Free Press policy director Ben Scott. "The FCC needs to take immediate action to put an end to this harmful practice. Comcast’s blatant and deceptive BitTorrent blocking is exactly the type of problem advocates warned would occur without Net Neutrality laws. Our message to both the FCC and Congress is simple: We told you so, now do something about it."