The race is on

Diary of a human Well, here I am at the crack of dawn getting ready for DARPA's Urban Challenge - the $3.5m robotic race of the century.

5:12 a.m.The hard-working hacks, if you will, were up at 4 in the morning for this shindig. DARPA decided to torture us with a 4:30 a.m registration and 5 a.m media briefing. Only, as it turns out, DARPA decided to move all this back by an hour but only told a few people. (Or I missed the e-mail).

In either case, this place is already abuzz with the sound of generators and people grumbling about the lack of coffee. In about two hours, the DARPA 11 will head toward the racing field. Then, each team will have to put its robotic vehicle through a six hour, 60 mile test here at a retired Air Force base in Victorville - a relatively crap town an hour outside of Los Angeles. 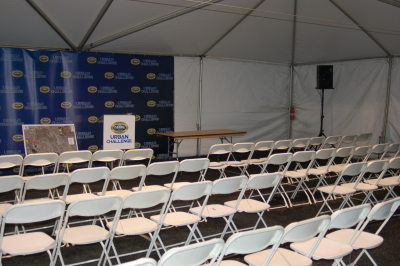 Two years ago, Stanford University won the DARPA Grand Challenge by sending a robotic Volkswagen across about a 150-mile desert course. This time, however, Stanford the 10 others have to prove their metal and mettle on an urban course. The vehicles need to park, make turns and merge with traffic all without human aid. All told, they'll be replicating something akin to a California Driver's License test. 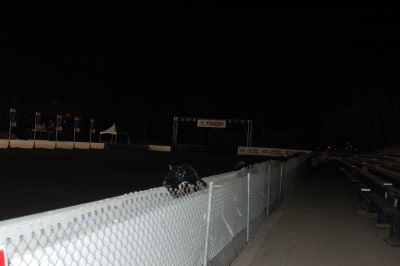 God willing, something will go through this later

Incidentally, I'd like to congratulate what appeared to be Team Princeton University for their beer collection seen through the window at the Ho-Jo. I suspect the lack of wireless bandwidth was the result of a made bittorrent run.

6:00 a.m. Well, very little has happened since the last update other than the other journos showing up. A very kind DARPA representative did refuse me the coffee being served in the official participants' tent because I didn't have a meal ticket. Where's the humanity at this hour? Didn't my tax dollars pay for that coffee? 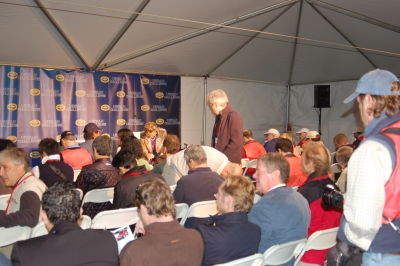 The other hacks arrive

No matter, I went through the exit and got caffeinated. Thanks, Uncle Sam.

The press conference is about to begin. I can hardly wait.

6:15 a.m. So, the DARPA program manager Norman Whitaker led the press briefing. For those of you who don't know, DARPA is the Defense Advanced Research Projects Agency, which is more or less the serious tech R&D arm of the US Defense Department.

Whitaker made a couple of important points that I should highlight. For one, today marks the first time these robot vehicles will be on the course together. Thirty-five teams were invited to a week of tests and only 11 passed DARPA's cut. All of the test runs, however, were done one vehicle at a time.

"They have not interacted at all so far," Whitaker said today. "So, if anyone tells you they know what will happen, they are lying."

Also, 9 of the 11 teams come from universities, while two are private entries. Still, even some of the university teams - Stanford and Carnegie Mellon come to mind - enjoy huge financial backing from DARPA and sponsors such as Google, VW, Intel and Red Bull.

(There are a ton of videos from the test week here.)

You could tell the hour got to Whitaker a bit as he described just how autonomous these machines really are.

"These are vehicles that are full self-contained," he said. "You put them on the starting line and push the button.

"There is no animal or midget inside that is controlling it."

Rather comically, DARPA will not even know if there's a real winner after the race ends today. It will be issuing tickets to vehicles that exceed set speed limits in places, for making illegal turns and the like. After all is said and done, DARPA will measure in infractions against the time it took a vehicle to complete the course and use a mysterious, subjective formula to tap a victor.

"We are looking for the best systems not necessarily the fastest systems," Whitaker said.

I pity the poor stunt drivers cruising around the course with these robots. Some of these bad boys are huge and hardly predictable.

On a historical note, DARPA opted for this type of event after major military contractors failed to deliver much in the way of robotic land vehicles. The government would like to see one-third of military vehicles operate unmanned by 2015. So, it has turned to students, enthusiasts and hungry companies to get the job done.

7:38 a.m. What event of this ilk would be complete without Apple co-founder and professional man child Steve Wozniak. 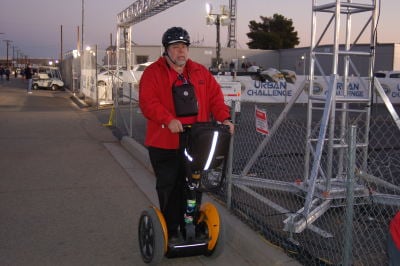 This man will do anything to be seen on a Segway.

7:45 a.m. They've just released the stunt drivers on to the track and pumped out the national anthem. I'm not sure how patriotic the robots are. 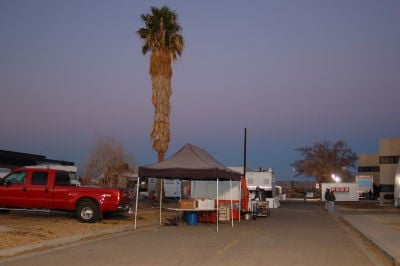 Hundreds of spectators have started streaming into this site - a barren airport/base in the middle of the desert. 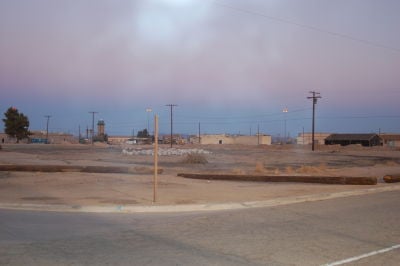 Er, DARPA has asked everyone here to turn off their cell phones because they may or may not effect the bots. Yeah, right.

Just learned that DARPA spent an unreal $21m preparing this site for the race. Frankly, that seems like a ridiculous total, especially given the lack of coffee.

I'm heading off to cover the race start.