Review The latest version of Apple's operating system, Mac OS X, is here and it's arguably the most significant revamp since X replaced 9. Leopard brings a new look to Mac OS X GUI, and a wealth of new features, some innovations other merely tweaks to old apps. In the first of a series looking at Leopard in depth, we go straight for Leopard's soul: the Finder.

How the Mac OS looks has always been a key component of its much-vaunted ease of use. It's supposed to be immediately clear what things do and how you proceed with the task at hand. That kind of went out the window a bit when Mac OS X debuted. A case in point: the traffic lights. They're certainly more pretty than Windows' equivalents, but with the exception perhaps of the red light, no more intuitive.

Change for change's sake, in other words, and that's a trend that continues into Leopard. Take the Dock. Out goes the flat launcher, replaced by an ersatz 3D version, complete with glossy sheen an icon reflections. Yes, it'll wow AppleStore visitors, but for users it's too much. The separator between the applications area and the documents space now looks like a zebra crossing. Why? Because some graphic designer suggested it would look cool. But the form has no greater function than before, and it's certainly not a visual clue as to what it does.

Fortunately, it's easy to get the old-style Dock back, albeit with the new version's glowing running application indicators in place of the arrows of old. You can also easily disable the 'fan' of icons that pop up when you click a Docked folder. Again, fans are in-store demo eye candy. I've no objection to the new style, but why does a new option have to mean the loss of the old pop-up list, which was easier to read and to select from? Still, at least with the new fan and grid views you can drag files out of that folder.

From Dock icon to Fan...

You can select a grid view of icons in place of the fan, which is better - or would be if the icons weren't so huge. Like the look of the Dock, there's no direct way to adjust the icons' sizes to meet personal taste. 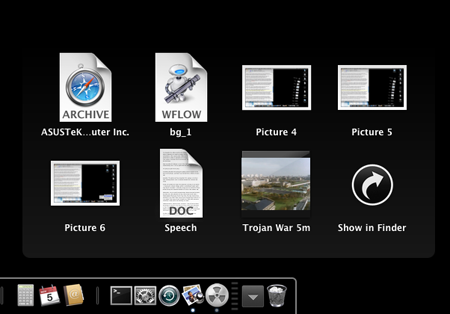 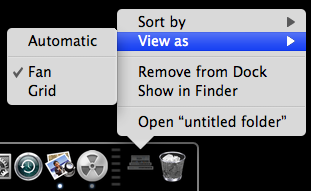