And no one gives a toss about DRM. So there

As the BBC's New Media technology chief, Ashley Highfield has some tough questions to answer. What is the 4,000 strong division really doing? How did the BBC manage to burn through £100m - what a Silicon Valley start-up can spend in ten years [*] - to develop a single piece of client software?

As he went on a PR offensive last week, El Reg was excluded - because we ask the wrong sort of questions. But his intent was clear.

Besieged by Linux users and anti-DRM campaigners, the BBC's tech chief has embarked on a campaign to call their bluff.

In an interview with BBC Backstage, Highfield argued that the BBC never intended to exclude Linux users from iPlayer feature parity with Windows, and would get there in the end.

The DRM and Linux crowd are being lined up as the whipping boys - a welcome distraction from what a thorough examination of the BBC New Media's department might unearth. Unfortunately, these rights-for-gadgets campaigners are only too happy to play the part of the boob. On Highfield's blog, one Penguinista has already gifted us what must be one of the quotes of the year, with this contribution:

"I would like to say," he writes, "that accessiblity [sic] for Linux users is EXACTLY the same issue as accessibility for those with disabilities."

Yes, both pay the compulsory tax that funds the BBC. But being a paraplegic is not a choice, in the way that choosing a hobbyist operating system is a choice, and the tasteless comparison doesn't reflect well on the "digital rights" campaigners.

And, heck - why stop there? Why not require that the BBC to retransmit its programmes in the Klingon language? Google already offers a Klingon language version of its search engine. It surely costs very little to add subtitles, and we can take it from there.

What a gift for the besieged Highfield.

A blast of righteous indignation from the Daily Mail about sandal-wearing hippies bleeding the taxpayer dry can't be too far away. One wonders what has kept them so long. 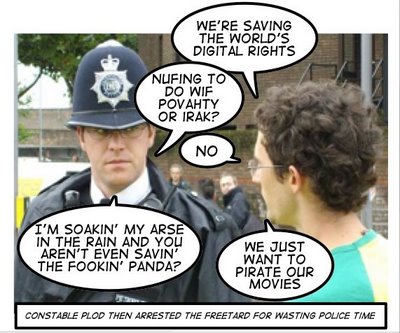 So that's the first piece of evidence that suggests Highfield is calling the campaigners' bluff. In doing so, he's laid a huge hole for them to march into, all placards waving.

The second is DRM.

The small but noisy anti-copyright lobby wants to be able to swap BBC content freely, wherever they are in the world. In challenging this notion, Highfield is throwing creators' rights and taxpayers' rights into the equation.

The BBC is under no obligation to provide stuff for free for the world, and the potential opportunity cost of giving away material, rather than licensing it to other broadcasters who would cheerfully pay for it, will cost the corporation far more than the iPlayer fiasco. The cost of acquiring the rights outright and upfront from producers, which the campaigners demand, would be extremely expensive - and the beneficiaries would be non-taxpayers.

Why should the BBC, Highfield is asking, spend so much more merely for the benefit of students in Ithica and Kalamazoo can swap files? And do taxpayers need to exchange files, or merelyview the material on demand?

Once again, it isn't hard to imagine another Daily Mail splash on the BBC pouring money down the drain - for the benefit of foreign freeloaders. It's a well-rehearsed script: just rub out the word "benefit fraud" and insert "digital fraud".

Highfield also has an ace up his sleeve.

While the public rejects DRM on music within a few seconds of realising the implications, it isn't clear that there's such opposition to other kinds of content, alas.

As a rule of thumb, people reject technology when it makes something harder - and DRM on music stops people doing what they've done with songs since the invention of the consumer tape recorder. But few people object when it's attached to something they didn't have before. On balance, the DRM is weighed against the perceived "advantage" - and from there, we're into specifics.

iPlayer content viewable on a PC certainly falls into the category of "something we didn't have before" - although the advantage is slight. Many Britons can already view on-demand services through a set-top box, and it isn't clear why we need to view it on a PC at all. Especially since the infrastructure doesn't really support it: British ISPs are under no obligation to go broke to fulfill this requirement.

In conclusion, then, Highfield is calling the campaigners bluff on two areas dear to their hearts: support for hobbyist platforms, and DRM.

Yet those tough questions at the top of this article haven't been answered, with campaigners providing easy fodder for Highfield.

I trust that Highfield has a swear box by his bedside, into which he makes generation donations to the these campaigners -they've gifted him the opportunity to avoid being accountable on the issues that really matter.

*Bootnote: Before me are accounts scavenged from the offices of Be Inc. more than five years ago. Over nine years, Be developed a cross-platform operating system (and a computer) - for around £405.

Get ready for that deposition tomorrow, Elon
Personal Tech5 Oct 2022 |

Well, yeah, when the batteries and power supplies can handle it, too
Science5 Oct 2022 | 20