A prototype wave power installation has sunk off the Oregon coast. The company which designed the equipment described the project as "highly successful". 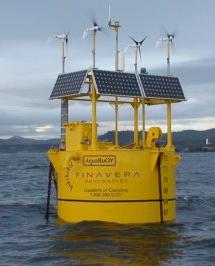 The prototype before it successfully sank.

The patented $2m "AquaBuOY 2.0", a massive 72-foot-tall floating vertical cylinder built by Oregon Iron works, was moored two and a half miles off Newport early in September. It was not intended to generate useful electricity, but rather as a test bed for future versions. The AquaBuOY's onboard instrumentation and communications were actually powered by solar panels and windmills. It sank on 27 October, just over seven weeks after being deployed.

According to Finavera, the renewable-energy company developing the AquaBuOY technology:

However, Finavera's Mike Clark told local reporter Miriam Widman that the test platform had only been engineered to survive for three months; and that the company had planned to remove it the very day after it mysteriously went down. Clark seemed to feel that the situation might be misunderstood.

"So when people say - Oh there's this device and it sank. How do you expect it to last 20 years or even five years in a real commercial development? It wasn't designed for that," he fumed.

"Granted, it wasn't designed for two months either... The actual data we got was positive and validated all the modelling."

The AquaBuOY uses a reinforced rubber hose "whose internal volume is reduced when the hose is stretched, thereby acting as a pump". The seawater thus squirted out is used to drive a turbine and so generate power, which is carried ashore by an ordinary submarine cable.

Finavera thinks the flotation section of the AquBuOy flooded and its bilge pump was unable to cope. There is a hint in the company materials as to how equipment based on "components that have been proven in other marine industries for decades" could fail like this.

AquaBuOYs are designed to maximise power output during more typical, moderate wave conditions on an annual basis... This avoids costly over-design that only captures extreme spikes in storm-based wave intensities.

As a general principle, if it isn't designed for storms, it won't survive for long in the briny. Over-engineering on land equals normal engineering at sea.

However, Clark told Widman: "We're pretty sure it didn't have anything to do with the power-generating technology." So there.

He also said he didn't suspect "foul play". Such foul play would in this case have been from local fishermen rather than French frogmen with limpet-mines or whatnot. Clark is probably right to suggest that the fishermen didn't meddle with his machine, as it seems that the sunken wreck is going to present them with severe problems. ®

Privacy, it's a useful marketing term *Offer does not apply in China
Research19 Aug 2022 | 8