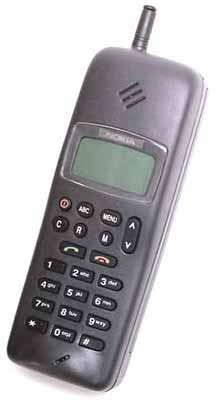 The 475g 1011 was rather heavier than today's slimline models. A lot of the weight came from the unit's nickel-cadmium rechargeable battery, which yielded a low - by today's standards - talk time of just 90 minutes. It could stay operational for 12 hours in stand-by mode.

The 195 x 60 x 45mm handset could hold 99 phone numbers and the names of their owners, any of which could be displayed on the 1011's two-line screen. There was no colour, no camera, no Bluetooth, no memory card slot and the handset had to have an extendible antenna. But it did introduce one innovation that phone owners now use without a second thought: text messaging.

However, the 1011 lacked that crucial component of all modern Nokia's: the infamous Nokia ringtone. This jingle wasn't introduced until 1994.

The 1011 wasn't the first GSM phone, either. That honour goes to the unnamed handset Nokia developed for Finland's Radiolinja network in 1991. The Finnish phone giant also supplied testing handsets that year for Hutchison's Orange in the UK, then in the process of building its network up from the Rabbit service launched a few years previously. 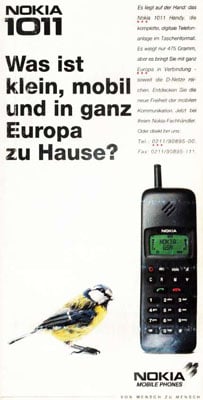 Advertisment from Germany, circa 1993

Development work on GSM - originally Groupe Spécial Mobile, later anglicised to Global System for Mobile communications - began ten years before the introduction of the Nokia 1011, in 1982. Five years, later 13 European nations agreed to mandate its use for their digital cellular networks.

The first version of the standard - dubbed 'Phase 1' - was completed in 1990, paving the way for the completion of the Radiolinja network, which had been initiated a year earlier, in 1989, and became operational in 1991.

However, unlike its predecessors, the 1011 was the first GSM phone to go into mass production. It operated in the 900MHz band, which had been adopted by UK networks Vodafone and Cellnet - now O2. Orange's phones operated in the 1800MHz band.

For all three, GPRS data services were way off in the future. Orange didn't launch its digital service commercially until 1994, the same year that Cellnet launched a digital network alongside its analogue service.