Much ado about GUIs

Letters Two of the country's biggest retail chains closed down on Friday afternoon in preparation for mayhem. In the end, tear gas wasn't needed to fight back the hordes when the stores reopened, and the iPhone went on sale in the UK.

Not withstanding a few exhibitionists who'd queued up overnight on London's Regent Street so they could get on the telly, Friday's iPhone launch at 6:02pm (geddit?) failed to bring out the crowds.

That's not to say the iPhone wasn't flying out of the stores come Saturday or Sunday. But as a "Windows 95"-style media event, it flopped, and let's hope it's the last anyone tries this caper.

Here are some letters.

I wanted to say how I enjoyed your round-up of the non-event that was the iPhone launch. In the end it all came to nothing, at the end of the day Apple were a little bit too impressed with themselves and failed to see the whole thing was a coals-to-Newcastle exercise.

At the end of the day the Brits use more mobile phones, have had them longer and expect far more from them than the US does. Like you said we expect to either pay for phones or get free ones with contracts but not both. They also seemed to miss the other angle that it also looks a bit brick-like and Brits know they can get much better phones for less money.

Kevin singles out Jemima "Comments(0)" Kiss' for being too easily impressed.

I was utterly gobsmacked a supposed "technology" journalist was impressed at the way you could sync your address book with a sodding iPhone. How old is this kind of technology? My Palm's have been doing this for years, my current Nokia phone does it now. My Outlook address book syncs with my phone via Bluetooth and it's easy-peasey. Work gave me a BlackBerry though that doesn't leave my desk. I think Apple has a real knack for selling capabilities that have existed for years in other products and just making them more well known.

It certainly looks like in Europe we are ahead of Apple's game for a change - the mobile phone in Britain is largely a utilitarian thing rather than an object of conspicuous consumption - the bullshit factor with the iPhone is not going to shift it, like you said it comes from the land of phones with huge antennas, they're a good five years behind the rest of us.

Even Jemima admits the Friday Frenzy was non-existent.

"I went to the O2 store in Notting Hill on Friday after work: straight in, no queue, five minutes, job done."

Reports from Leeds and Manchester suggest consternation at Carphone Warehouse, which had 500 each. One of the CW stores shifted just one iPhone in half an hour. 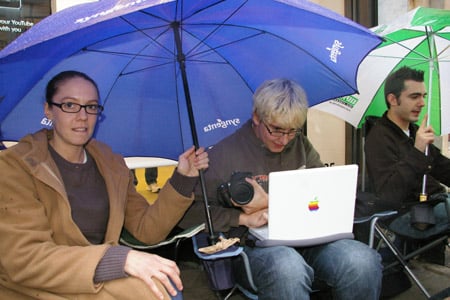 People who really shouldn't have bothered... iPhone shoppers in the rain on Thursday

Carphone Warehouse had to agree to spend £10m in marketing the iPhone. This money wasn't available so came from the CPW Christmas party, which had a budget aside of £8m (their parties are legendary; every staff member, remote branches have their staff flown down). The firm told staff there wouldn't be a party this year as the date of the party is the same as the iPhone launch, whereas the truth is the iPhone launch was instead of the party.

CPW do not make a penny on any iPhone they sell. The benefit to them is just to get people into the shop, where they can be sold other products when in there.

OK, the Carphone Warehouse chain has just over 1000 stores. That's £10k per store per party; either these boys can put it away, or that's quite high. Could any Warehousers confirm if they're still having a Christmas Party? To mail, click here.

Aggressive upselling was a theme of the weekend at all the O2 stores, too.

Excellent article as always. I wonder how long it will be before you're bombarded with outraged emails from Apple fanatics claiming that the photos of empty Carphone Warehouse shops have all be doctored and that there were really thousands of people in every one, all wishing to experience the feeling of joy and inner peace that can only be brought about through buying and over priced, over hyped, under equipped piece of technology?

On a more serious note, I was most surprised (and not a little gratified) to hear the decidely sceptical tone that the BBC greated the iPhone launch with. On Friday's Today programme, Radio 4's 'technology reporter' Rory Cellan-Jones was far from the fawning sychonphancy that has characterised most of the other coverage, and even went as far as using the phase '...form over function...' Similarly, the BBC News website has a rather amusing spoof of the Mac vs PC ads, in which Mr Cellan-Jones and one the online reporters compare the Jesus phone to a N95. Suffice it to say the comparison is not terribly flattering...

Here's a happy iPhone owner - who isn't complaining that he didn't have to queue.

Out in the back of beyond, away from the centre of the universe (aka London Town), it was much the same. In Stratford Upon Avon, I sat in Starbucks until 5 to 6, then wandered over the the O2 store. There were two of us stood outside and by 6.02 (pfff) there were 4 people. There were 7 staff inside and the only reason there was a queue was because the store was shut until then. The iPhone might raise the bar to great new heights for its interface, but the launch was laughable.

For shame it isn't 3G, but I wonder how many "average" users would be bothered about that? I've never used a phone for internet or email before and not used any crackberry devices, so the whole free unlimited-data-when-out-and-about email-on-the-go, google maps thing is proving to be brilliant and despite the fact it's not blazing fast, it works, it's free and has impressed non-techy friends no end. Plus, there's free wifi all over the place now, if you want to do some serious surfing - at which point, you're going to want to be sat down...hello Starbucks / McDonalds. If you just need to glance at something (oops, I've left home without that address), or check if that important email has arrived, you're sorted.

I'm loving it - and I don't even need to justify the expense, as work coughed for mine. It makes my Sony Ericsson seem stone age when comparing the basics such phoning / texting.

Will Woodhouse is on to something here:

When was the last time anyone queued for a Sony Ericsson in this country? The fact that few hundred people queued at all for a mobile phone at each Apple Store is pretty amazing. How many queued for the N95? With the product in fee supply, it was only going to be the hardcore fans that would be first in line, why would you queue when the product would be freely available the next day with no queue? Perhaps Apple should have said that they didn't have enough stock to boost those queues.

So if you are comparing the iPhone launch to those of other phones, I would say that the iPhone launch was extraordinary and successful, the only thing it failed to do was live up to the expectations of the media.

Then again, some Apple devotees rarely miss the chance to show that they're the Angriest Readers On Earth:

Subject: Have you lost your mind?

I might suggest that before you write your next story that you drag yourself out of bed and actually try seeing things for yourself. Assuming that your 'readers' reports were even real, to rely on the perceptions of others in a situation like this suggests that the next time someone asks what you do for a living, the word 'reporter' should probably not spring so readily to your lips.

How do you think 100,000 iPhones were delivered over this past weekend? The Distribution Fairy?

Get it right, or get lost,

(The Professor Doctor didn't take too kindly to our suggestion to calm down a bit. Physician - heal thyself!)

When is your disinformation campaign check to arrive from the competitors? Here in the States, we say that little iPhone just punted you in the butt and left quite an impression.