Changing the fabrication process of G92 has reduced the amount of power used by the chip and this has led to a significant change in the design of the graphics card. Previous 8800s used a double-slot design that exhausted hot air through a vented bracket to the outside world. The cooler on the GTS/GTX was very efficient and quiet but also very bulky so it was no small proposition to install a pair of 8800s in SLI.

By contrast, the new 8800 GT is a single-slot card that vents its heat inside your PC case from an exit at the top of the shroud next to the SLI connector. The cooler on the GT is as quiet as the cooler on the double-slot cards so once it is sealed inside your case the emitted noise is lower, although you may well need to employ an extra case fan to deal with the heat. The heatsink/cooler on the 8800 GT is made from aluminium and copper with a plastic shroud that clips on to add some cosmetic appeal and to duct air to the correct places. The six-pin PCIe power connector has moved from the top edge of the card to the back where it is tucked away inside the cooling shroud.

During our testing, the cooler got very hot and was at least 20°C hotter than the 8800 GTS we used for comparison. However, the graphics chip remained cooler and was happy to overclock, which suggests that the GT's cooler is very efficient.

The GT doesn’t replace either the 320MB or the 640MB GTS yet. It is cheaper than both models so we wanted to see how it sits in the current line-up. We had 8800 GT-based boards from Asus and MSI, both of which are reference designs. However, the Asus EN8800 GT is clocked at the reference 600MHz/1800MHz speeds while the MSI NX8800GT-T2D512E runs at 660MHz/1900MHz with Stream processors that run at 1650MHz. 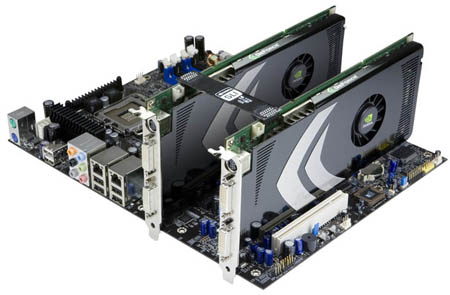 We had no trouble overclocking the Asus to 690MHz/2000MHz, while the MSI went a little further to 700MHz/2040MHz. Out of the box, the MSI had a definite advantage over the Asus but once we had overclocked both cards there was nothing to choose between them in terms of performance. You pay an extra £12 for the Asus which comes bundled with Company of Heroes: Opposing Fronts while the MSI is packaged with Colin McRae DiRT, so your buying decision is likely to come down to which game you prefer.