Residents of Whitehaven, Cumbria will tonight become the first UK inhabitants to lose analogue TV transmissions. At 2am, the region’s BBC 1, ITV 1 and Channel 4 analogue signals will be permanently switched off. 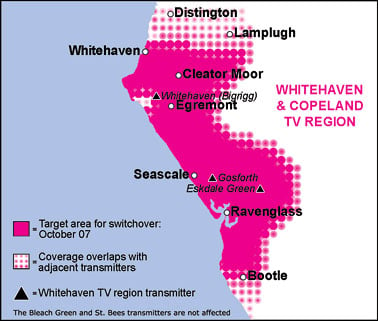 The Whitehaven and Copeland TV region

Last month, the town and surrounding area of Copeland lost its BBC 2 analogue signal. However, come 2am all residents will be forced to go digital by either subscribing to Sky or switching to Freeview – or risk losing the delights (you sure about this - Ed?) of Eastenders, Emmerdale and Hollyoaks.

Whitehaven’s residents have had access to around six digital TV channels through Freeview since its BBC 2 analogue signal was switched off. However, come 2am the region will gain the viewing rights to around 20 digital channels.

Digital UK, the Quango* created to manage the digital switchover, claims around 500 of the area’s 25,000 residents are still to make the switch. So it's set-up several help centres to assist residents, until Thursday.

Whitehaven was apparently chosen as the first British town to have its signal cut because it has a dedicated transmitter. It's also claimed a change of signals there won’t affect neighbouring areas.

Next for the chop is the Border TV region on 6 November 2008.

If you want to keep the miscreants out, put the updates in, Redmond says
Patches28 Jan 2023 | 6