Apple TV goes to the movies

May be useful after all

Sure, Apple TV is pretty close to useless if you wanna watch stuff on your television. But it's a godsend to at least one independent filmmaker.

This weekend, at a neighborhood movie theater in Brooklyn, New York, an Apple TV made its way into the projection booth, streaming a high-def digital flick onto the big screen. And when we say big screen, we mean the really big screen.

With the New York premiere of his debut feature, The Insurgents, writer-director Scott Dacko is using Apple's video contraption in place of a digital tape deck, bypassing so many of the hassles that plague poorly-funded digital filmmakers struggling to reach an audience.

"As far as I know, we're the first people to have ever done this," Dacko told us. "And it looked great." Well, it looked good. Dacko acknowledges that the image is "a little flawed" in places, thanks to some heavy compression from Apple's web-centric video codec. But his Apple TV kludge is cheap. And it's easy. 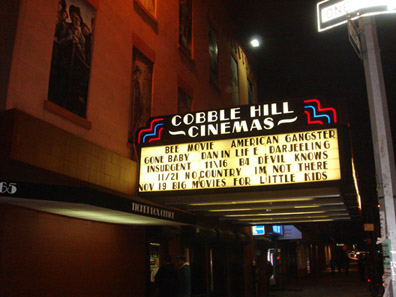 Since shooting The Insurgents with an HD camera in early 2006, Dacko has shown the topsy-turvy political thriller in film festivals across the globe, and each time, he was forced to squeeze the flick onto a different breed of digital media. He's shown on DVD, DVcam, DigiBeta, Beta SP, D5 and HDCam.

"For an indie filmmaker, this is a huge cost, and it's a huge pain in the ass," Dacko explained. "And you never know if they're really going to be able to play. The theater might say they take HDCam, but then you get there and they don't take HDCam SR. Or you've got 4.4.4 HDCam, and they only play 4.2.2."

Then, when the film was picked for a week-long run at the Cobble Hill Cinemas in Brooklyn, he was faced with a new problem. More comfortable screening films the old-fashioned way - on film - the theater wasn't fully equipped for digital projection. It had an LCD projector - a Sony VPL FX52 - but no tape deck.

Dacko thought about renting a deck for the week. But even a low-quality DigiBeta setup would cost him $1000. And if he upgraded to an HDCam deck - which would require an HDCam projector - he'd end up shelling out a cool ten grand.

Next page: Projection on the cheap
Page: