No IT angle There has been much fanfare in the press about the unveiling of King Tutankhamun's mummified face. The boy king has recently been installed in a clear, climate controlled chamber, confronting visitors to the Valley of the Kings with his mortality, and his humanity. 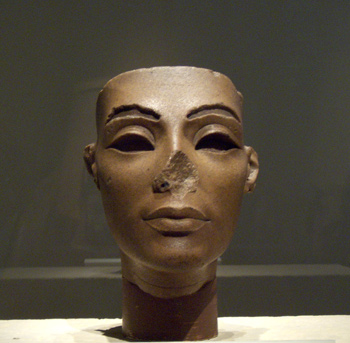 The casual reader could be forgiven for thinking that this remarkable exhibit forms part of the "Tutankhamun and the Golden Age of the Pharaohs" touring show, soon to open at the building formerly known as the Millennium Dome. But it doesn't, which is a bit of a shame.

The exhibition is still impressive: it is hard to be jaded in the face of an array of more than 130 stunning objects, each more than 3,500 years old. The exhibition includes statues of several members of Tutankhamun's family, including his stepmother, Queen Nefertiti. More everyday objects are also included, such as a child's chair, and a cosmetics container.

It also covers the political upheaval in Egypt during the reign of Tutankhamun's father, Pharaoh Akhenaten (Amenhotep IV). Akhenaten swept away the traditional multitude of Egyptian gods and goddesses in favour of a single deity: the sun disc. Tutankhamun was integral in restoring the old traditions, before he died aged just 19.

But the stars of the show are the items removed from the body of the boy king, by his discoverer, Howard Carter. Tutankhamun's crown, golden collars and an ornate ceremonial dagger are all displayed around a representation of the sarcophagus. Sadly, the iconic burial mask is not part of the show.

The tickets are not cheap: £20 a head, but at least half (or at least 75 per cent, depending on who you talk to) of the money will go directly to supporting conservation work in Egypt. In total, the exhibition is expected to raise $140m dollars for the country.

Zahi Hawass, secretary general of Egypt's supreme council of antiquities, said that it was time for the world to stump up some cash in return for the privilege of viewing the artefacts: "There are no more free meals," he said.

King Tutankhamun has not made a penny from various tours, he said, including the record breaking visit to the British Museum back in 1972. "This time, the proceeds must go to the preservation of monuments."

The individual exhibits are stunning, and the range of items on show is mind-boggling. The audio tour through the Valley of the Kings (narrated by the cuddly-sounding Omar Sharif) is a great primer for anyone with an interest.

But £20 is a hefty price-tag for an exhibition being marketed to families. And because it is being hosted at the O2, not at The British Museum, you can't go straight downstairs and have a look at the Rosetta Stone, or take a tour of Ancient Greece while you're in town. ®

We'd like to say thanks to HP for the loan of the Photosmart R930 series camera with which we took the picture above. (So easy to use, we didn't even have to read the instruction book. And they sent it with two...)

Rolling back to the pad tomorrow, the SLS might finally take flight in August
Science15 Aug 2022 | 7