'Age restrictions apply to this product'

We're delighted to report this morning that supermarket monolith Tesco - famous for its cut-price Xbox 360 offer - is doing its bit to combat the degeneration of Blighty into a lawless land a la Democratic Republic of Congo in which rival bands of jenkem-crazed hoodies battle each other in the smouldering ruins of UK society.

Yes kids, let's make no mistake, if you're thinking of kicking off a rumble using cutlery, you won't be getting your 16-piece offensive weapon set from Tesco: 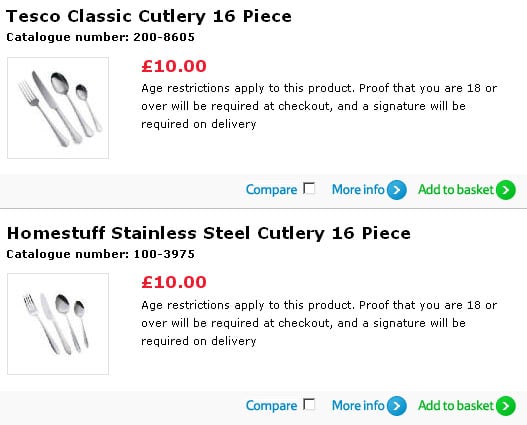 The above proscription is confirmed by a quick search for tableware, although chillingly there is nothing whatsoever to prevent hood rats from buying a "Tesco Wood Placemat & Coaster Set 8 Pack" with which to club decorated war veterans, making off with their pensions and spunking the lot on alcopops and gangsta ringtones. ®