Not too different from other interfaces out there, you might think, but the way the buttons are laid out with those pesky Back and Forward options placed high and low on the player, it's actually quite annoying to use. 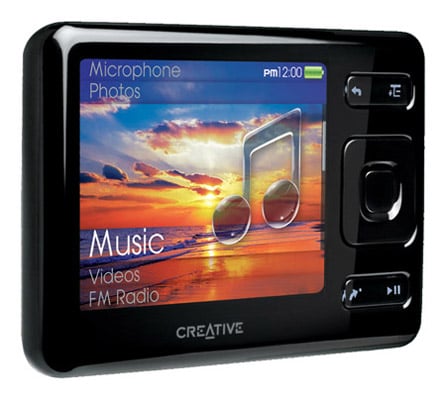 Unless you opt to purchase the extra AC adaptor, you charge the Zen by connecting it to your computer. Creative claims a single charge gives five hours' video playback and 25 hours' audio, which matches the Nano. This obviously depends on usage, how you have the backlight set up and what files you're playing, with sound-enhancement options sucking power, and AAC and WMA files shortening the time too. We got 17 hours out of the Zen on a full charge, which included lots of fiddling around with the menus, some video and the rest purely music, which we felt was respectable.

File support is another area the Zen shines in. JPEG, BMP, GIF, and PNG pics can be viewed directly, with TIFFs being converted by Creative's software. As well as your MP3, WAV and WMA files you can also use the player for non-protected AAC files, which will appeal to anyone using iTunes Plus. Video support is also generous with WMV9, MPEG 4 SP, Motion JPEG, DivX 4 and 5, and XviD playable as long as they are resized to 320 x 240 resolution - again Creative software comes to your aid here.

The Zen is available in 4GB, 8GB and 16GB options. With each model you get Creative's earphones, which are rubbish. So you might want to invest in something half decent. You also get a short USB-to-mini-USB cable, a Quick Start guide and the installation CD that includes the Creative Media Explorer software.

Comparisons with Apple's iPod Nano are inevitable - the Zen is a direct rival to the lesser 'pod. The Creative player has a larger screen - by half an inch - comes in a larger capacity and then there's that SD card slot. It has more features too.

So, what should you opt for? It's a tough call. We really liked the Zen. If you're determined not to go down the Apple route, you'll find the Zen a worthy rather than wannabe competitor. But, we still feel that Creative isn't quite there with this undeniably capable option. It's close, but it's no iPod killer.