In a victory for Reg readers, MPs have rejected Ofcom's proposal for a publicly-funded new media quango.

The Commons' select committee for Culture, Media and Sport rejects the idea that the creation of a "Public Service Publisher" gatekeeper would help the market.

The report is here, while Ofcomwatch blog broke the news here. The PSP would have cost taxpayers £300m a year, with the cash going to production houses to create interactive Web 2.0-style concepts.

"As a self-actualising media node, I welcome this redistribution of government funds from provincial luddites to new media 'creative' Sohoites," wrote one. "Ed Richards's initiative 'gets' new media on so many levels. Let's flashmob this bitch up to escape velocity."

(This, and other responses are on the Ofcom site.)

MPs go beyond saying that there's no sign of market failure, which is a precondition for the regulator to intervene. The committee concludes that the new quango would distort the market.

The committee writes: "Geoff Metzger, managing director of the History Channel, perhaps summed it up best when he said that the public service publisher was a 'cure with no known disease'."

You scratch my back - I'll give you a subsidy

The "Public Service Publisher" is a quintessentially New Labour backscratching exercise, backed by friends of Ofcom chief Ed Richards, who calls it his "personal crusade".

The quango would be "a new media answer to a new media question", an Ofcom spokesman told us back in March.

Unfortunately, the hastily-scribbled concepts looked less like the future of media, and more like Look Around You updated with Web 2.0 buzzwords: 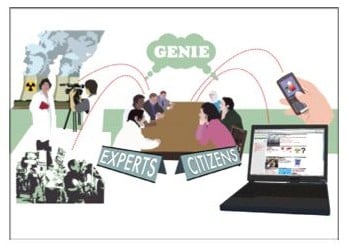 The regulator gave the job of studying the idea to executives at two media companies Andrew Chitty of Illumina Digital, and Anthony Lilley of Magic Lantern Productions, a tiny TV production house. The pair recommended it start life with a budget of £100m a year, although this may need to rise.

So Ofcom's quango looks dead - but new media luvvies are getting the taste for hand-outs. Lilley continues to campaign for new media subsidies (aka "give me the money") in his self-aggrandising Grauniad column, for example here. Only he calls them "investments".

Don't expect him to stop. ®