Review Any followers of the Bauhaus movement working in the Nokia design studio where presumably off sick on the day this baby was cooked up. Even the most cursory glance will tell you that form following function was not top of their agenda. That the phone appears frequently in the video for the recent Sugababes chart topper should also tell you a thing or two about the market Nokia is aiming at. 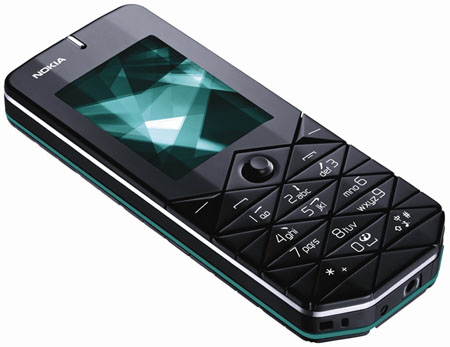 The Prism's diagonal keypad layout and design has been inspired by the infinite geometrical forms found in architectural surfaces. Apparently. We suspect the designer just likes Toblerone a lot. That aside, it does look rather fetching and, more to the point, it works. OK, it's no better than a keyboard designed with a slavish and exclusive devotion to ergonomics, but nor is it any the worse.

One slight quibble is that neither the start- and end-call buttons, or the two soft-menu keys, are exactly were logic or custom would dictate them to be. Clearly, logic and custom didn't see eye to eye with geometric layout and got a slap.

The 7500's other look-at-me feature is its 2in, 240 x 320, 16m-colour TFT display with an "organic desktop" and "event-driven themes", which is Nokia-speak for saying the screen glows in a cool and trippy manner. 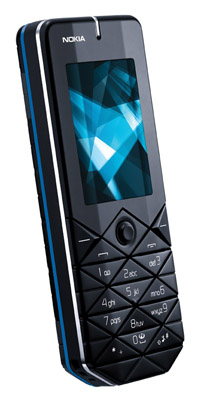 Actually this was all pretty disappointing. Sure, you get a decent selection of themes, but frankly neither they, nor the handset's various lighting functions, are anything much out of the ordinary.