An amateur cameraman has released footage of the death of a man tasered by Royal Canadian Mounted Police at Vancouver International Airport.

Cameraman Paul Pritchard filmed Pole Robert Dziekanski,40, in a "clearly agitated" state on 14 October in a "secure area outside the Canada Customs exit". At the start of the 10 minute film Dziekanski, who had arrived hours before* to visit his mother, can be seen "taking office chairs and putting them in front of the security doors", as CBC News explains. He then "picks up a small table, which he holds, while a woman in the arrivals lounge calmly speaks to him in apparent effort to calm him down".

Dziekanski then "picks up a computer and throws it to the ground". Three airport personnel arrive and "block the exit from the secure area, but Dziekanski retreats inside and does not threaten them". 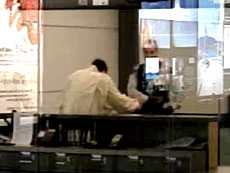 Four RCMP officers arrive shortly after and roughly 25 seconds later, "there is a loud crack that sounds like a Taser shot, followed by Dziekanski screaming and convulsing as he stumbles and falls to the floor" (see pic).

CBC News continues: "Another loud crack can be heard as an officer appears to fire one more Taser shot into Dziekanski. As the officers kneel on top of Dziekanski and handcuff him, he continues to scream and convulse on the floor. One officer is heard to say, 'Hit him again. Hit him again', and there is another loud cracking sound."

As the video ends, officers "appear to be checking his condition and one officer is heard to say, 'code red'". An ambulance team arrived a few minutes later, but "their efforts to revive Dziekanski were unsuccessful and he was declared dead".

Pritchard gave police his footage "on a promise that they would return it within 48 hours". However, the next day, they told him "they would not be returning the recording as promised". He then hired a lawyer to recover the film, which police eventually returned to him on Wednesday.

Pritchard claims he was provoked into action because he "feared a coverup by police". RCMP's Cpl Dale Carr said police "kept the video longer than they anticipated in order to protect the integrity of the police investigation while they interviewed witnesses".

Carr told a press conference on Wednesday: "It's just one piece of evidence, one person's view. There are many people that we have spoken to. What I urge is that those watching the video, take note of that. Put what they've seen aside for the time being. And wait to hear the totality of the evidence at the time of the inquest."

Among the controversial points raised by the video are that police "have said repeatedly that there were only three RCMP officers involved in the incident, but the video shows four men in RCMP uniforms", and that RCMP have said officers "did not use pepper spray because of the large number of people at the airport at the time".

However, as CBC News notes: "The video shows Dziekanski standing alone with the four officers in an otherwise empty area, which is separated from the public area by a thick glass wall."

CBC News concludes: "The RCMP's integrated homicide investigation team, the BC coroner's service, the Vancouver International Airport Authority and the Commission for Public Complaints Against the RCMP are each conducting their own investigations into the incident." ®

*CBC News notes: "The Polish immigrant arrived from Europe the previous day around 4pm, but for some unknown reason he did not clear customs until after midnight." The cause of his distress is likewise unknown.