What better way to start a Friday than with a stupendously glorious picture of our planet? Well, we couldn't think of many better ways that are legal, so we've gone for the picture option. 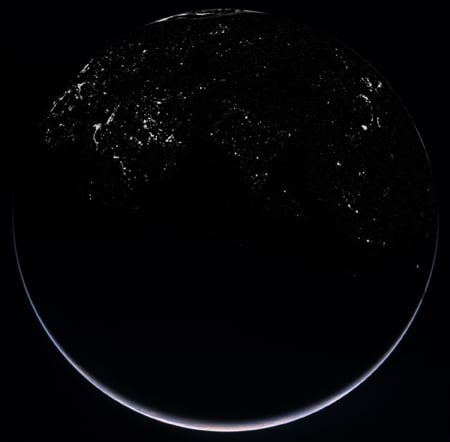 The Earth's night side, as seen by Rosetta. Credit: ESA

This is a composite image of the night side of the Earth, as seen by the cameras on board Rosetta, the European Space Agency's comet-chasing mission.

Although Rosetta launched in 2004, it has been roaming the inner solar system, gathering gravitational boosts for its journey out to the comet Churyumov-Gerasimenko. This latest series of pictures was taken as it swung past the Earth on 13 November.

The picture of the pinpricks of light, betraying humanity's 24-hour existence to anyone who might be watching, was taken with the craft's OSIRIS wide angle camera. The spacecraft was roughly 80,000km above the Indian Ocean, about two hours before its closest approach to Earth.

You can't see it very well in the small picture we've posted, but the light crescent at the bottom of the Earth reveals some small details of the planet's surface, too. Click here for the full size picture, so you too can bask in a sliver of Earthlight before you get on with anything too strenuous today. ®