2007's Top Products Asus' diminutive Eee PC 4G 701 micro-laptop is here. It's garnered an amazing welcome from computer users looking not for the acme of performance but for a highly portable wireless notebook with a decent battery life. Will they be disappointed?

First, for anyone's who's missed the Eee PC hoopla, Asus' little laptop is like a standard 13.3in notebook that's been shrunk to two-thirds of its usual size. It's not the first of its kind – Sony's been offering a variety of these tiny machines for years, Toshiba once made headlines with its oh-so-small Libretto and we're old enough to remember Olivetti's much missed Quaderno. 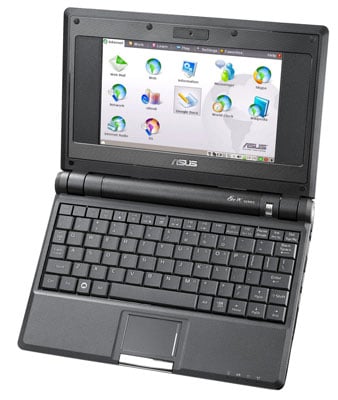 What the Eee PC brings to the sub-sub-notebook category are a few modern refinements: Linux, Wi-Fi and solid-state storage. Our review unit has 4GB of Flash, of which around 2.9GB was consumed by the OS, bundled apps and sample files leaving just over a gigabyte for new stuff.

The machine starts straight into Asus' own front-end: a set of icons grouped into categories, each category on a different tabbed pane. The bundled software is comprehensive, and includes Skype; Firefox; Thunderbird; KDE Mail, used for PIM data rather than email; OpenOffice; Acrobat Reader; the Pidgin multi-network instant messaging app; photo, music and video managers; a media player; and an array of utilities, including a file browser.

Not that you should need one. Asus' GUI is clearly intended to be the be-all and end-all of your Eee PC experience. The above-mentioned apps are presented as generic icons – eg. Web rather than Firefox – and are mixed with others that simply trigger links to specific websites, such as Wikipedia and Google Docs. The Internet Radio icon takes you to MediaU.net, for instance. 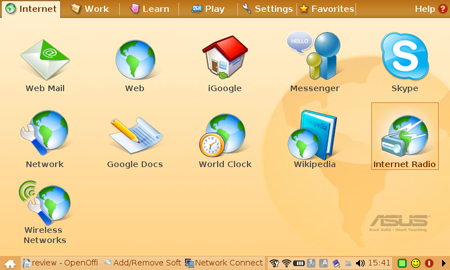 The Eee PC may run Linux for cost reasons – it's cheaper to install than Windows – but that doesn't mean this machine's aimed at fans of the open-source OS. Indeed, File Manager hides away almost all of the OS' internal workings – though it's not hard to find them if you know what you're about.