The mathematics that underlie the E8 Lie Group, a 248-dimensional puzzle that was finally solved in March this year, have already been put to use in developing a new Theory Of Everything. 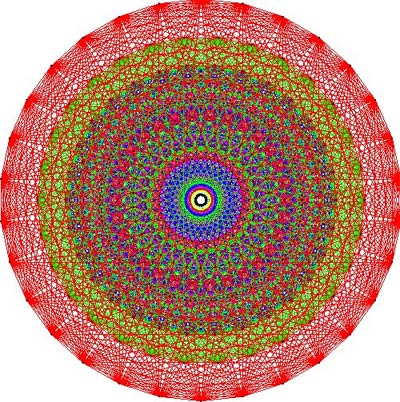 A representation of E8.

Credit: John Stembridge, based on the work of Peter McMullen

Garrett Lisi, a theoretical physicist who is also a surfer and snowboarder [Is that allowed? - Ed], has used the proof to help him develop his attempt to unify the mutually contradictory theories of quantum mechanics and gravity.

The most conventional approach to unification right now is string theory, which suggests that the fundamental particles are not actually fundamental at all, but are rather all different expressions of one thing: a string. Different vibrational modes let us "see" different things, so one vibration shows us an electron, another a proton, and so on*.

But Lisi says he doesn't like it because it lacks elegance. He says that when he started to play around with the E8 Lie group structure, it seemed to help the disparate pieces of our knowledge - fundamental forces, particles and so on - fit neatly together.

"It would be kind of nice if it all made sense, mathematically anyway," he is quoted as saying. "It’s nice to think that there’s a bigger picture that’s beautiful and that we’re all a part of it."

The paper is here, and a slightly less intimidating explanation is here for the mutant geniuses among you. We wouldn't stand a chance against its spiky, wiggly and frankly dangerous-looking formulae, so we'll move swiftly along to the decidedly-unfrosty reaction from the physics community.

According to reports, Lee Smolin at the Perimeter Institute for Theoretical Physics (PI) in Waterloo, Ontario, Canada, says the work is fabulous. He is widely quoted as calling it "one of the most compelling unification models I've seen in many, many years". Oxford maths professor Marcus du Sautoy also says that E8 does seem to underpin much of the fundamental structure of nature.

Others have not been so kind: the effort has also attracted critics calling it everything from "baloney", to decrying its author as a "crank". A touch harsh, perhaps, but we won't have to wait long to find out on which faces the egg will appear.

Lisi's theory predicts a number of new particles, and within a year or so the Large Hadron Collider at CERN will be up and running at the sort of energies at which we need to be looking for them.

Although Lisi is proud of his work so far, he does not seem to have invested too much of his self-esteem in it. The researcher, who is not affiliated with any particular institution, acknowledges that the idea is a long shot, and says that if it turns out to be wrong, he'll toss the idea out and try something else.

"It's useless to argue with nature," he says.

*Yes, it is a bit of a clumsy explanation, but come on, it is string theory. We do what we can.