Robots to get krazy kannon tech, too

Metal Storm, an Australian company looking to market a radical gun design, has announced delivery of production weapons to the US military.

The firm has also announced a deal to work with famous US robotics maker iRobot. However, its future remains far from assured. 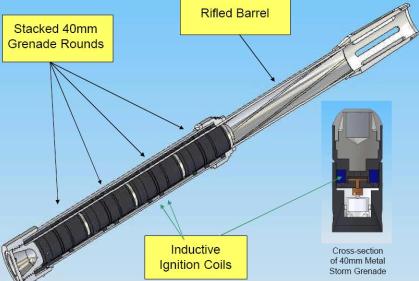 Get your gun off really fast with electrical assist.

Metal Storm's special sauce is the use of "stacked projectiles" lying nose-to-tail in a gun barrel. Each projectile has its propellant charge contained in an open chamber at the rear, thus effectively functioning as a small rocket which fires itself away down the barrel. This clears the way for the next to be fired.* Metal Storm rounds would be difficult to trigger by mechanical impact like ordinary cartridges, so the company uses electric induction.

A Metal Storm barrel can hold a number of rounds, and lots of barrels can be grouped together in a pod offering the possibility of extremely high burst rates of fire. Alternatively, the technology could be used to offer multiple shots from weapons which are normally single-shot, such as under-barrel grenade launchers attached to rifles.

The Metal Storm concept is the brainchild of Mike O'Dwyer, a one-time grocer in Brisbane, who has reportedly spent "30 years and much of his own money" on developing it. The company has been around since 1994, and in 1997 a 36-barrel 9mm prototype weapon splurted out 180 shots in a hundredth of a second, which equates to a million rounds per minute rate of fire.

The "million rounds per minute gun" gained widespread fame, and Metal Storm went public in Australia in 1999 to much acclaim. The firm listed on NASDAQ in 2001.

The problem with all this is that high rate of fire over a very short space of time is actually a fairly meaningless stat - especially from a multibarrelled weapon. You could fire both barrels of a shotgun simultaneously, claim they'd gone off a half-millionth-second apart, and say you'd doubled Metal Storm's record. 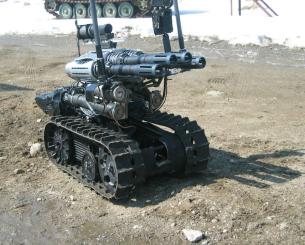 Of course it comes on a robot.

There are military applications where a high rate of fire is good to have - most obviously, when trying to shoot down incoming missiles or artillery shells. More projectiles in the air in a short space of time increases your chance of a hit.

The Phalanx automatic antimissile system can do this, shooting at 4,500rpm. However, the Phalanx - contrary to some people's beliefs - does not put up a "wall of metal". It aims carefully, fires short bursts, and walks its wounds onto target just like a human machine gunner.

The really impressive thing about the system is its detection and aiming kit, not the gun. Phalanx actually uses its radar to track the stream of outgoing projectiles and steer them onto target. It taps out short bursts of less than a hundred shots, mirroring the tactics of properly trained humans - just much faster.

If Phalanx fired at a million rpm it would have shot its bolt, so to speak, in less than a tenth of a second - probably failing to destroy even a single target.

In the end, a really high rate of fire is just a very fast way of wasting ammo. And Metal Storm ammo is more complicated and therefore more expensive than normal equivalents, so this is especially unfortunate. It's also (a lot) more difficult to reload quickly. In the specific case of antimissile/anti-artillery work, you also need to worry about the weight of the multiple barrels, as everything needs to be slewed round very fast.

Metal Storm guns need lots of barrels - for ammunition storage as much as for rate of fire - and these barrels are heavier and more unwieldy if anything than normal ones (because of the need for induction electronics up much of their length). All these are bad things.

Essentially, splurting off huge numbers of superimposed projectiles at flying things in a fraction of a second is fairly foolish, and this has gradually sunk in. Metal Storm stock has tanked, and in 2005 O'Dwyer "retired" as CEO. He has had two successors in that post so far. 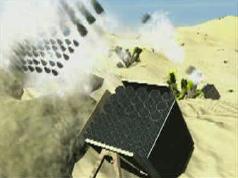 Oops baby, I did it again.

Now the plan is to try and get something sold as soon as possible. To that end Metal Storm has focused on its version of standard 40mm launcher grenades, and now the company is pleased to announce that it has sold some of these to the US Navy's weapons labs.

"I am pleased to see the company reach this important stage on our path to commercialisation," said Lee Finniear, the latest Metal Storm CEO. "Research and Development will continue to be an important part of our business but it is our product focus that will ultimately generate the bulk of future revenue."

The company has also lately announced a memorandum of understanding with well-known American robotics firm iRobot - maker of the Roomba auto vacuum cleaner - and has shown off a droid armed with a quad-barrel Metal Storm 40mm grenade launcher, called FireStorm by the company.

"Together with Metal Storm, we aim to develop a superior next-generation weapons platform," said Joe Dwyer of iRobot.

It's hard to see why, really. There are already robots that can shoot 40mm grenades from a proper belt-fed autolauncher, rather than running out after 16 shots like the FireStorm. The marginal advantage of being able to select different ammo types hardly seems like a big deal.

The firm is also looking to use its 40mm thud-guns to shoot down incoming RPG shoulder-fired rockets of the type carried by every second or third insurgent gunman worldwide. However, the difficult bit of the job - detection and tracking - isn't a trick Metal Storm is set up for, and funnily enough all tests to date have simply made "the assumption that the RPG launch detection and tracking had already been accomplished".

The only Metal Storm product that looks vaguely useful and as though it might work is the "3GL" triple-shot 40mm grenade launcher for mounting under an assault rifle. A normal underbarrel 40mm launcher is strictly single shot, so it's conceivable that people might buy this if it were light and cheap enough.

Even if the 3GL's a runaway success, though, it would probably struggle to recoup all the cash that Metal Storm has poured away.

"The board and I are disappointed about our share price," said Finniear in his latest CEO bulletin.

"By any comparison the company has made significant steps to commercialisation in the last year... the share price has not reflected any of these advances. We do not believe that the stock price variation of late reflects the progress we are making... we trust the market will react appropriately and the stock will see upward momentum."

It may be best not to hold one's breath. ®

*Gun history buffs will be well aware that stacking several bullets and charges on top of one another in a single barrel is not a new idea at all. Such schemes usually go under the name "superimposed loads" in gun-nut circles, and were common - though rather unsafe - back in the days of muzzle-loading powder and ball weapons (example here).

Who watches the watchers? Samsung does so it can fling ads at owners of its smart TVs