Sir Paul McCartney’s ex Heather "Mucca" Mills yesterday used the launch of a planet-hugging billboard campaign to suggest that drinking rats' milk might save our beloved Earth from livestock-provoked apocalypse - much to the derision of UK tabloid The Sun.

Mills was at Speakers’ Corner in Hyde Park to promote Vegetarians International Voice for Animals' (Viva!) HOT! intiative, whose "central theme is that the most effective action individuals can take to reduce global warming and other environmental catastrophes is to change their diet – move away from meat, dairy and other animal products and move towards a plant-based diet".

According to Viva!, livestock are "the second biggest cause of greenhouse gases at 18 per cent – compared to 13.5 per cent from all the world’s different modes of transport combined", and the organisation has duly deployed Mills to persuade the public to change their ways: 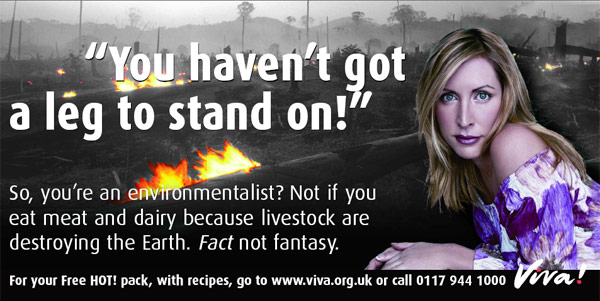 Mills declared in the Viva! press release: “The startling truth is that animals farmed for meat and dairy are now one of the greatest threats to the planet. They are at the heart of almost all the world’s environmental catastrophes. Viva! has been saying this for years and now the UN has confirmed it with a report so detailed that it can’t be ignored – except by government. It remains silent and continues to pour huge subsidies into meat and dairy farming.

“Fortunately, as individuals we don’t have to wait for anyone. You can end your involvement in this vandalism overnight and help to secure our children’s future. All you need do is change your diet – it’s that simple. Change your diet – change the world!”

Fair enough, you might think, but the Sun reckons she also told the press yesterday: “I’m not telling people to go vegan overnight. But if they stop drinking their cows’ milk lattes maybe this sort of thing won’t have to happen.

“There are 25 alternative types of milk. Why do we not try drinking rats’ milk, cats’ milk or dogs’ milk?”

Oh dear, oh dear. The redtop moved with lightning speed to shoot down this plan, wheeling out "authority on milk production" professor Ben Mepham, who said: “It sounds ludicrous to me. How on Earth would you get the milk out?”

Er, dunno. Really small milking machine? And just to make sure readers were in no doubt that Mills wasn't hopping it like she talked it, the Sun notes that she "arrived to make her green appeal in a two-car convoy", and further "kept the engine running while she gave a string of interviews in a £35,000 black Mercedes 4x4". ®