The UK MoD has announced the cutting of the first metal for its new stealth robot bomber, Taranis.

Project Taranis, according to the MoD, will build an unmanned demonstrator the size of a small fighter jet. It will be stealthy, speedy, and able to "deploy a range of munitions over a number of targets." The robot jet will also be able to take on enemy aircraft, whether manned or unmanned. It is being built by UK-headquartered aerospace colossus BAE Systems. 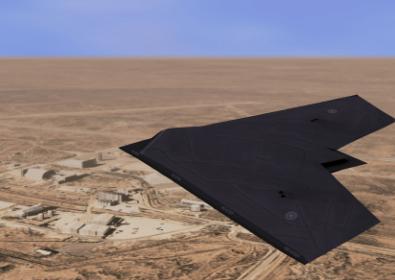 Maybe we should have painted it a different colour.

The Taranis aircraft, which will cost the taxpayer £124m, is not intended for service with the British forces. Rather, its construction is meant to keep alive fighter-design skills within BAE, and develop the company's expertise in stealth and unmanned-aircraft technology.

That said, the RAF's Deep and Persistent Offensive Capability (DPOC), the name for plans to replace Tornado deep-strike bombers in coming decades, may be defined to some degree by Taranis. DPOC is being handled by the MoD's Strategic Unmanned Aerial Vehicle Experiment (SUAVE) team.

"[Taranis] is not just about helping position UK industry for a future programme, and putting the UK on the map with cutting-edge technology," according to SUAVE boss Jonathan Barratt, quoted by MoD press people.

"It is also about informing the basis the future RAF and potential future military capability," he apparently added.

Deep and Persistent Offensive Capability (DPOC) [will] enable the timely engagement of static and mobile targets deep behind enemy lines. Additionally there will be a capability shortfall created by Tornado GR4 being withdrawn from service around 2025. An Unmanned Combat Air System (UCAS) is a potential cost-effective solution.

Dropping exploding things on targets "deep behind enemy lines" is the main reason the RAF is an independent service, not part of the army or navy. This is critical stuff for the men in light blue. However, aircrews risking their lives over hostile territory also constitute much of the basis for the air force's status as a combatant uniformed organisation.

If the Tornado is replaced by a flying stealth robot, the generation of manned strike jets going into service now could be the last. The RAF of 2040 might then find its people working almost entirely in safe, secure air bases - perhaps even in the UK. Pilots handling robot planes over Afghanistan today are often seated in America.

Safe, rear-echelon military activities are increasingly being outsourced. Furthermore, service in a combatant job involving potential danger is rightly seen as an essential box for a uniformed military officer to tick if he or she aspires to high command.

In other words, if Taranis leads to Tornado being replaced by an unmanned system, the RAF faces being civilianised - or at the very least losing much of its remaining status as a combat arm.

Operational Analysis and technological evidence is currently too immature to categorical [sic] confirm that the capabilities offered by [a flying robot] will fulfil requirements. Evidence will be gathered [for a] decision around 2011... on the future force mix of manned and unmanned air vehicles in the 2018 to 2025 timeframe and beyond.

It will be very surprising indeed if the RAF accepts that a unmanned system can replace its Tornado bombers. That would strongly suggest that the new F-35s and Eurofighters could also be so replaced (or - heavens! - refitted for pilotless operation). Jet aces aren't going to fancy seeing their jobs outsourced, perhaps to overseas employees who need nothing more in the way of skills than the ability to click a mouse.

So in fact Taranis isn't very likely to produce much in the way of change at the RAF. It is, contrary to Barratt's pronouncements, mainly about helping industry. Specifically, helping out BAE Systems - a company two-thirds of whose personnel are already based overseas. ®