They say hope springs eternal, and nowhere is this better currently demonstrated than down at eBay, where you can snap up a near-new Nintendo Wii for a mere one million quid 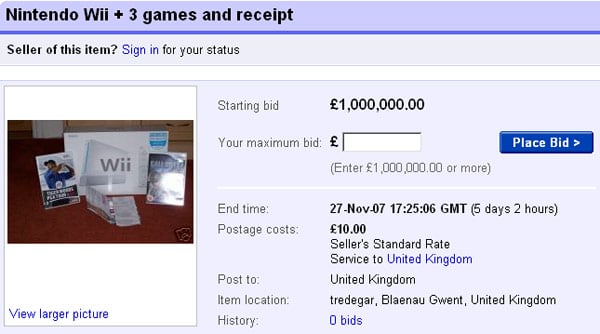 Mind you, it is in "excellant [sic] condition" and you get three games thrown in for the "excellant [sic] price". The reason for the sale is, apparently, that the owner is "saving up for a Sony PS3", and judging by the Wii's selling price he's after the Ferrari-branded, solid gold, diamond encrusted limited edition PS3 which is delivered to your door by Denise Richards wearing nothing more than a Call Of Duty 4 disc to cover her modesty. ®

Thanks to James Summerson for alerting us to this bargain.